To read this guide from the beginning check out part 1 here.

Only leaders of each faction can use War Horns to declare war. War horns are very rare and important. Leaders have to communicate with each other before using them recklessly. 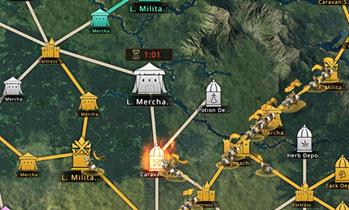 March Bugles are also very important for the factions as increasing the earning of them, will allow all members of that faction to use extra actions per day. Players use 1 March Bugle for each trading, transporting, constructing, attacking, and defending.

The main concern of the Logistic players is producing and transferring Armaments. Armaments are earned by trading and trading can be done by all players even the offensive and defensive military positions. But only players who are in Logistics will earn Contribution Points by doing them.

The base shops that are in spawn locations have no shop limits and an unlimited number of players can trade there but with less Armament production efficiency. It’s more efficient to fill the shops in large merchant cities, medium merchant cities, and small merchant cities in this order to maximize the Armament income for the faction. 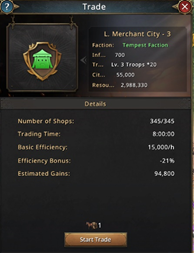 These Armaments can then be transferred by the Logistics players to different cities that are connected by a route to spawn banner. Transferring also gives players Contribution Points, but it’s very important for all players to listen to their leadership directives about the transports. If cities are fully developed and are not fortresses, the extra Armaments there can’t be used or sent back so they are in practice wasted for your faction.

After 5 million Armaments are gathered in a city, a Construction order can be started by a leader. Each Construction has 500 quests and when those are done, the city will become a better place to defend or will earn other advantages. Each Construction can be built three times before it’s on the maximum level in each city. Here is a list of these available constructions and what they do:

>  Enlistment order: Adds an additional natural defensive regiment to the city, which will defend it against the attackers. After a successful capture, as all-natural troops are also dead, this construction resets to 0.

> City defense: Increases the city defense by 5,000, all the defending troops get 1% total bonuses for every 5,000 defenses. After a capture, the progress on this will be 50% preserved.

> Troop training: For each level, the natural troops defending the city gets 25% total bonuses. The progress on this will only be 50% preserved after a capture.

> Market expansion: Only doable in merchant cities, each level of this increases the shops in the merchant city by 5%. The progress on this will only be 50% preserved after a capture.

> Trade Order: Only doable in merchant cities, each level of this increases the trade efficiency in the merchant city by 3%. The progress on this will only be 50% preserved after a capture. 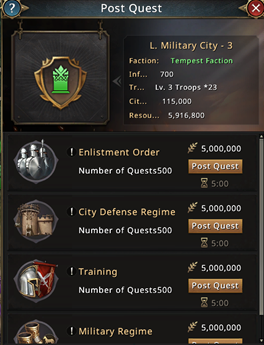 The Armaments can also be used to spawn troops from fortresses to reach the battlefield faster. This is very expensive (takes 100 armaments for each 1 troop).

Defenders can send their armies to defend a city at any time they like even before the war is declared, but attackers will only be able to join a fight during the battle period after the declaration phase (the 10 hours or 10-minute wait) ends. Fights will happen 1v1 between players so everyone will be using their own buffs and bonuses. In this battle system, there is a queue of attackers and a queue of defenders. Each time, the game will put the person on top of the attacker queue to fight the person on top of the defender’s queue and the loser of this battle will be sent back. Battle will continue to match people up for fights till one queue is completely empty.

The progress bar will move faster toward each faction control when they have more deployed armies in their queue.

In battles in this event, 40% of your losses will be instantly healed. From the 60% that is remaining, based on the enemy casualty rate some will instantly die regardless of your hospital space but the rest will go to your original hospital if they have enough space. The base casualty rate for both attacks and defenses in this event is 20%.

Army size bonus from Sept of seven has no effect on this event.

All your marches will start from your max Resilience when they are sent out of the faction spawn. These marches will then lose resilience for marching or winning fights. By default, every 5 seconds of marching reduce 1 Resilience and each win reduces 15 Resilience from your march. When your Resilience is lowered, you will take more damage from the enemy and your damage against them reduces. The formula for calculating this damage (dealt and taken) is calculated with these formulas:

Things like Administration Talent Tree, commander Darius and the items that can be bought from Token Shop and used on Sept of the Seven can affect your Resilience.

> Never start actions before consulting with other leaders of the event.

> Try to establish a constant and reliable communication method with the rest of the involved kingdoms and alliances in your faction.

> Always make sure you have enough fighters on for the battle you’re declaring.

> Try to have diplomacy with other factions that can become your temporary allies in the event but be wary that everyone is trying to win as well.

> Try to make sure the route toward central cities is protected so your defense can’t be locked out.

> Focus on improving your faction economy, with the War Horns, March Bugles, and the Armament income.

> Lead everyone by explaining your tactics and keeping them on the same page.

> The event is very long, make sure to distribute tasks between the leaders and other helpful players.

> Announce battles before they happen, as much as you can, to players. So the players can show up and earn contributions and glory points.

> Be wary of other factions’ movements and change your tactics. Adopt and overcome.

> Try to maximize your contribution by being active with your military positions. You can switch between tasks based on the phase of the event

> Listen to leadership directives, especially with transports and battle tactics.

> Don’t waste your fortress's armaments by spawning there unless if it’s asked by your leadership. This option should be kept for your strongest accounts unless if your leadership has other plans.

> Always actively participate in the defense and attacks if it’s possible for you. Your faction needs you and you will earn merit, tokens, and elimination points (can get a lot of rewards this way)!

This event provides many rewards for active players!

1 – Glory Raffle can be used by players with the Glory Raffle Tokens. These tokens can be earned by finishing different phases of tasks and obtaining more Contribution Points. The raffle can provide SS Troop Appearance Medals, Darius medals, and Dragon Blessing Stones!

2 – Glory Siege pages give extra March Bugles and Glory Points of Administration Talent Tree that can be used during the event. It also gives you free Glory Raffle Tokens, S Troop Appearance tokens, and Dragon Blessing Stones based on your Contribution Points! 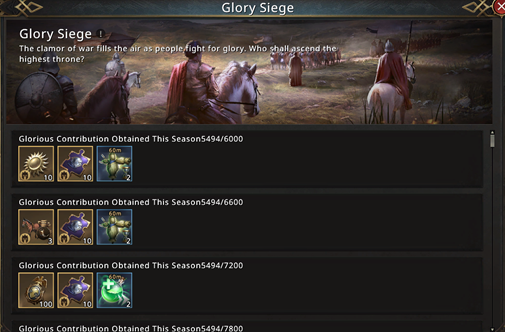 3 – After the event ends, all players in each faction earn a lot of rewards based on their faction’s rank in obtaining influence.

4 – After the event ends, players with the highest elimination ranking earn total attack royal badges and a lot of awesome rewards, such as a great castle exterior and Glory Raffle tokens. 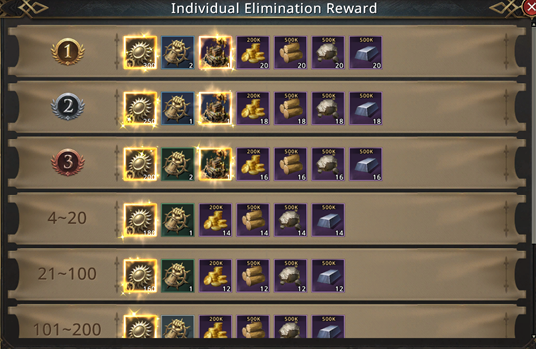 5 – After the event ends, players with the highest contribution rankings will also receive extra prizes. These prizes are the dragon blessing stones and SS troop skin medals. 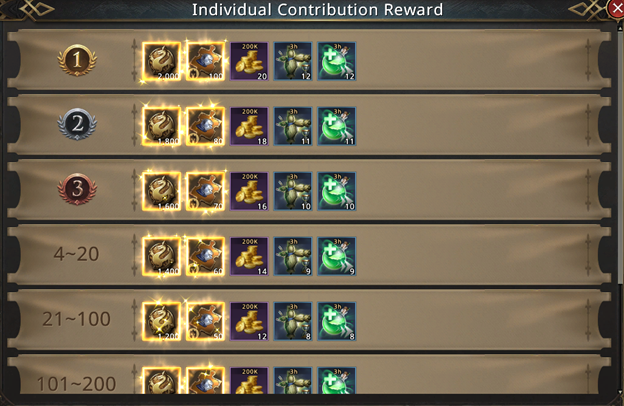 The event is long and hard but at the same time very fun and challenging. And we can admit that without a doubt, it’s the most rewarding event in the game as it is!

I hope you enjoyed reading my guide and it will help you to strategize for your factions and to play this event with a better understanding! <3