The new strategic and fun battlefield, Glorious battle, changed the schema of the game. Eight powerful factions, each consisting of several kingdoms will fight each other for a month to take control of most strategic cities on the same battlefield, to contend with each other for the most prosperous lands and the seat of honor.

The glorious battle is a complicated but very fun event. The event is supposedly going to take one month (28 days) to finish (has on and off-season). During this event, each player is presented with a limited set of actions that they can do every day at different times to help their faction. Players will be able to trade (to gather armaments) and to transport them to different cities on the map, construct buildings in the cities to upgrade them, and participate in battles as attackers or defenders.

At the same time, the game chooses a few of the players from each kingdom (from their highest power alliance or the highest power players as a leader. The leaders have the option to declare war and lead their factions toward the cities on the map or start construction.

To win this event, factions and leaders have to start working together before anything else. To decide their actions together, they will have to establish reliable and fast ways for communication and coordination. It’s very important for the leaders to control the usage of their War horns (the resources that are used for declaring war) and the Armaments (the resources that are used for constructions and fast deployment of troops) and it’s very important for players to keep a track of their March bugles (what is used to perform actions in the event). Coordination and cooperation are the keys to be successful in this event, and great rewards such as Darius commander medals, SS troop skin tokens, and Dragon blessing will be rewarded to factions and players based on their performance.

In this guide, I will review the core mechanics of this event and will try to guide you through its complications as a player and a leader.

In general, the event map looks like a giant board game. The battle interface has many parts that I will explain here: 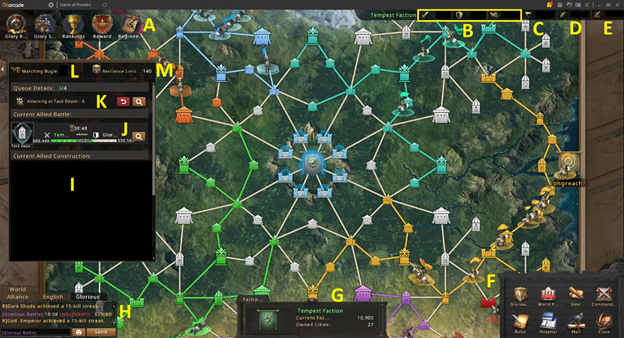 A: From here you can access the event raffle, Check the rankings and prizes, and see a short tutorial for the event. I’ll review this part more in the section about rewards.

B: This shows how many players from your faction are in each military position.

C: Shows the Influence of your faction. You earn influence by capturing targets on the map. The faction with the most influence wins.

E: This shows the number of War horns your faction has. By hovering over it you can see when you will earn the next war horn.

F: The basic control panel for the event. You can change your military position and check the current event phase, the issued commands, reports, and your hospital from here. The close button will close the glorious battle event interface.

G: When you click on objectives on the map, this notification bar shows some details about them.

H: The glorious event has a special chat in which you will be able to communicate with all kingdoms in your faction.

I: This part shows the current Construction commands issued by the event leadership.

J: This part shows the ongoing battles related to your faction.

K: This part shows your current queue. Each action spends 1 March Bugle and takes a queue. By default, you only do 2 actions at the same time (queue has 2 spaces) but with Administration talents, you can increase that.

L: This part shows the amount of March Bugles you own. If you hover over it you can see when the next one will be added.

M: This part shows the maximum Resilience your marches have. I will explain resilience in a later section.

I will discuss the different event resources and their importance in future parts of this guide.

There are 8 starting points on each event map for 8 participating factions. Each faction contains 5 kingdoms. All alliances registered to these kingdoms will play this event together and as one team. The event leaders are the top officials (Duke, Chief Knight, Financial Advisor, Diplomatic Advisor) of the alliance with the most power which is registered in each of these kingdoms. If either of these officers is not in the kingdom on matchmaking day, the highest power players on the kingdom will be chosen as leaders instead. In other words, 20 players will be chosen as leaders for each faction, 4 from each kingdom that is a part of that faction.

Players won’t be able to change kingdoms on the match-making day. Afterward, they will be playing this event for the kingdom they were in during the matchmaking day for the whole duration of the event. This means everyone should be in their home kingdom for this event before it starts but can change kingdom during the event without any issues or effects on this event.

Leaders can declare war and issue commands in addition to what everyone else can do. In other words, it’s the leadership that will direct the whole faction toward objectives while everyone has to cooperate to make victories possible. I will review leadership duties in a separate section later on.

The goal in the event for each faction is to gather as much Influence as they can. A kingdom gains Influence by controlling the objectives and cities on the map. The central city in the center of the map called the Glorious City gives the most Influence and is very important for winning the event.

The map has 8 starting points, one for each faction in the match-up. The objectives on the map are connected with lines (roads). Each faction will only be able to expand their territory, defend it or transfer resources using these roads. In other words, each faction can only attack the objectives that are directly connected to their current territory and respawn point with a route. If a faction loses connection to a city because an enemy takes a city in the middle of that route. No more defense or armament can be sent to that city.

This means that factions' defenses and constructions should be prioritized on cities that are closer to enemy territory and can cut the route toward their other cities.

This event has different stages in some more objectives will start to become available (come out of the initial bubble) and factions will be able to expand toward the center. At the same time, controlling the regional cities gives them bonuses, economy, and Influence that are crucial for winning this event. The following table show the purposes of the different objective: 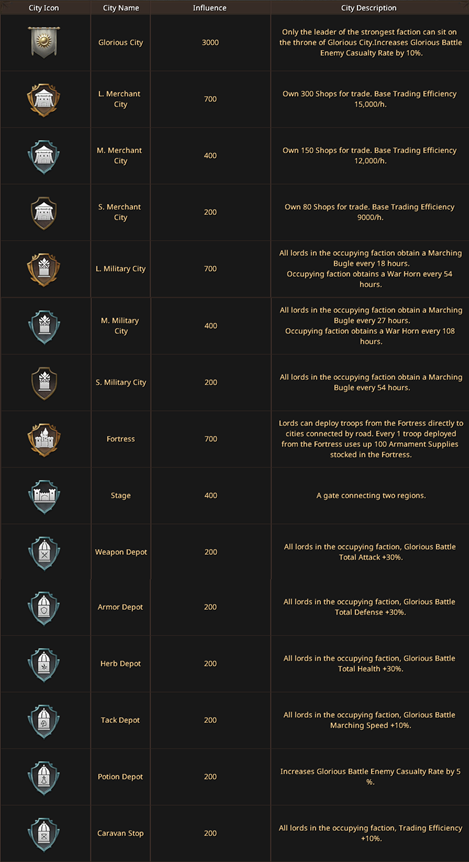 These players have increased max transport and faster traders. They also have the option to transport Armaments to the owned cities that have a direct route to the spawn banner.

With trades, the faction earns Armament. These Armaments will be transferred to different cities in which leaders can start Constructions to make them more powerful. Armament can also be used to spawn troops from the fortresses which are very important for the later stage of the event. Everyone starts in Logistics and many players should stay on it at the start as in the first phases of the event when most objectives are bubbled and players can only trade.

Players who are in Logistics earn Contribution Points based on what they trade and transport. Logistic players have a base of 100 max resilience.

They have nearly all military bonuses boosted but have a 50% reduced trading speed. The Offensive Talent Tree is specialized for attacking the cities and objectives on the map. The players who are in this military position earn Contribution and Glory points by participating in battles and killing enemy troops. Offensive players have a base of 140 max resilience.

Also, have military bonuses boosted, but don’t have the trade speed reduction or March Speed bonus from Offensive boosts either. The Defensive Talent Tree is specialized for defense and can only affect defending objectives against the enemies. Defensive players have a base of 160 max resilience.

Regardless of your military position, you can also earn 30 Contribution Points by doing a Construction quest as well. 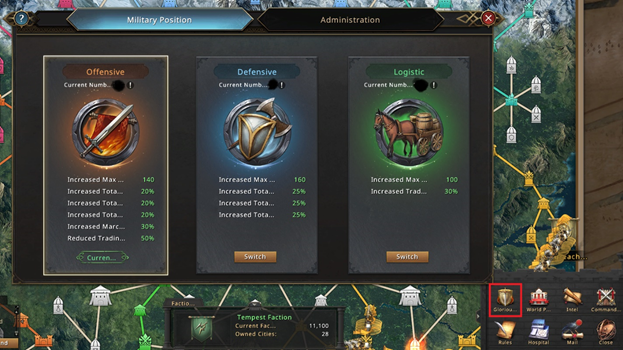 You can access and change this military position with a cooldown of 24 hours from the “Glorious Order” page that is shown on the above screenshot.

Earning Contribution Points is unlimited and everyone can earn as many as they can be based on doing what their current military position requires of them. But only a certain amount of these Contribution Points turns to Glory Points every day. By default, this limit is 400 per day but you can increase it to 600 with the Honor token. Also, commander Darius can increase this limit.

Based on your current military position, and the number of Glory Points you have earned so far, you can fill in a specific Talent Tree that will give bonuses for your military position tasks. This talent tree, which is called “Administration” can be reset using 1,000 Diamonds unlimitedly without reducing your Glory Points. 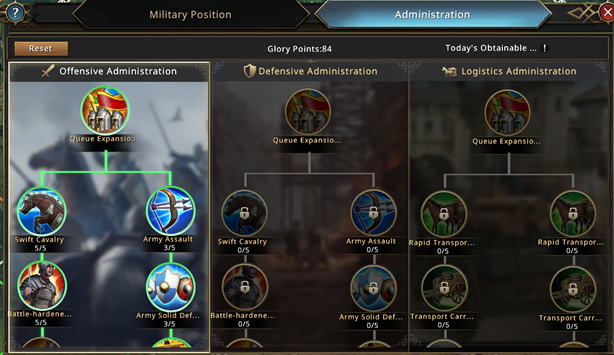 To continue reading this guide, check out part 2 here.