In the kingdom far far away, known as Kingdom 320, there lived a warrior by the name of GodVegeta. This warrior was a powerful adversary to anyone choosing to set their grounds against him. He also commanded a powerful army within his castle walls. GodVegeta is a Lord known to have a short temper, bloodthirst for battle (and experience to back it up) and brutal honesty.

Kingdom 320 is a peaceful kingdom with clearly defined rules under King BORUTA. Kingdom rules follow peace time and dedicated time for war time between alliances and individuals. As any other kingdom, we do have a few blacklisted lords and ladies that chose not to obey the rules, and an occasional merit hunter visiting the kingdom. But for the most part, it is a well organized and peaceful kingdom.

The last War Day GodVegeta was surprised and angered by a  sudden audacity of a scout who infiltrated his castle while his, and his troops’, guards were down. This time he was prepared, and would not let anything like that happen again. He quickly summoned his troops to the Great Hall for an announcement:

“Today we march! We will find those enemy lords who are slacking off and we will pillage and take from them what was left unprotected.” He paused as if concentrating with deep thoughts.

“There will be no slacking off in brothels or pubs, today we will show our might to the kingdom!”

Hordes of troops screamed out raising their shields and weapons, the sound was so loud that it shook the walls of the castle.

Soon after this announcement, Lord GodVegeta and his army marched out in search for enemy castles. 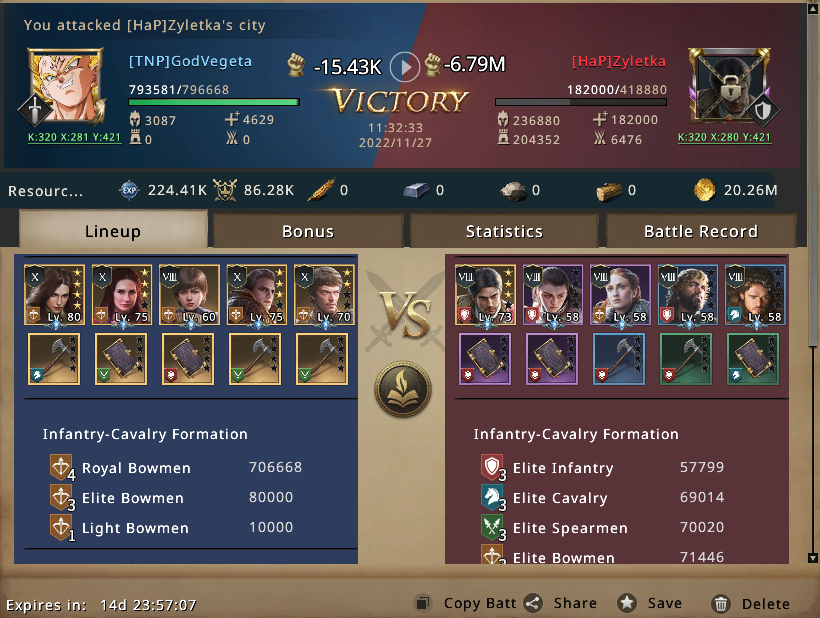 Their first victim was Lord Zyletka who left himself completely exposed with only but a weak army within the castle walls. Lord GodVegeta’s troops quickly assembled, breached the castle walls and pillages the treasury after slaughtering their slacking army. 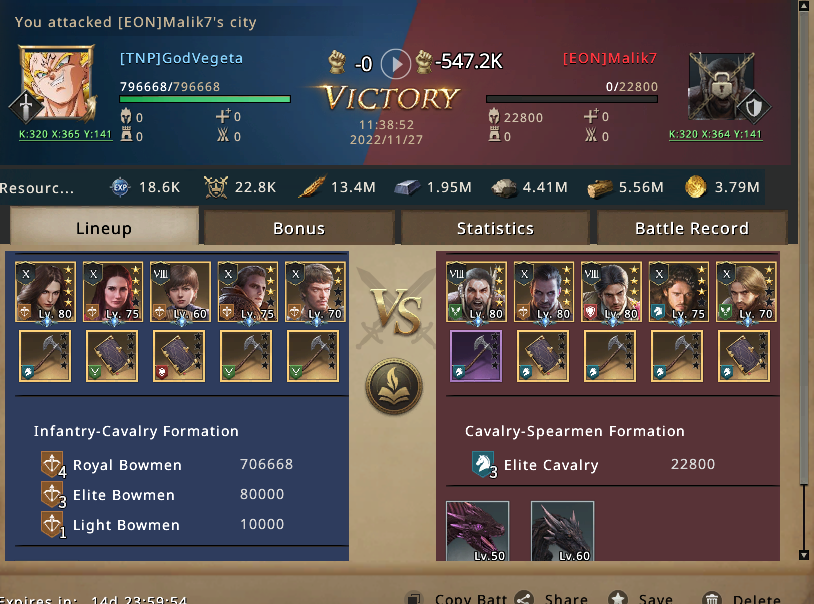 Lord Malik7 of a nearby alliance surrounding Winterfell has met a similar fate. He had but a few soldiers guarding his castle walls, which were quickly disposed off by the powerful and bloodthirsty army of Lord GodVegeta. 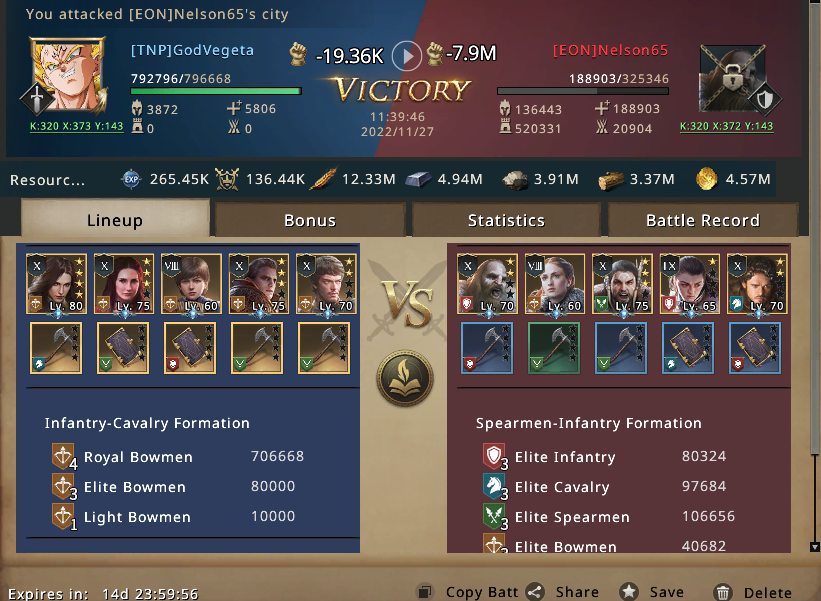 Just when you thought it was over, another Lord of EON, Lord Nelson65 showed his weak side having his castle gates wide open. Lord GodVegeta sent his army with full force to crush his troops and empty his treasury.

Lord GodVegeta and his army marched on towards SSt alliance. He noticed a Lord with open gates, but a castle booming with troops. He sent out one of his scouts to scheck it out.

The scout reported that Lord crapette indeed was slacking off, with troops often unarmed within his castle walls. However, the size of his army was nearly 4 times that of Lord GodVegeta’s.

Lord GodVegeta summoned his army to listen to his speech:

“This will be a tough battle, but a battle that I know you are prepared for. You have trained countless hours sharpening and honing your skills for warfare for just a moment such as this. Remember your training, remember who you are. Most importantly, remember who you serve! YOU ARE ELITE WARRIORS OF Godvegeta! NO ARMY IS STRONGER THAN YOU!” Now go, my warriors, and bring me MY VICTORYYYYYY!” 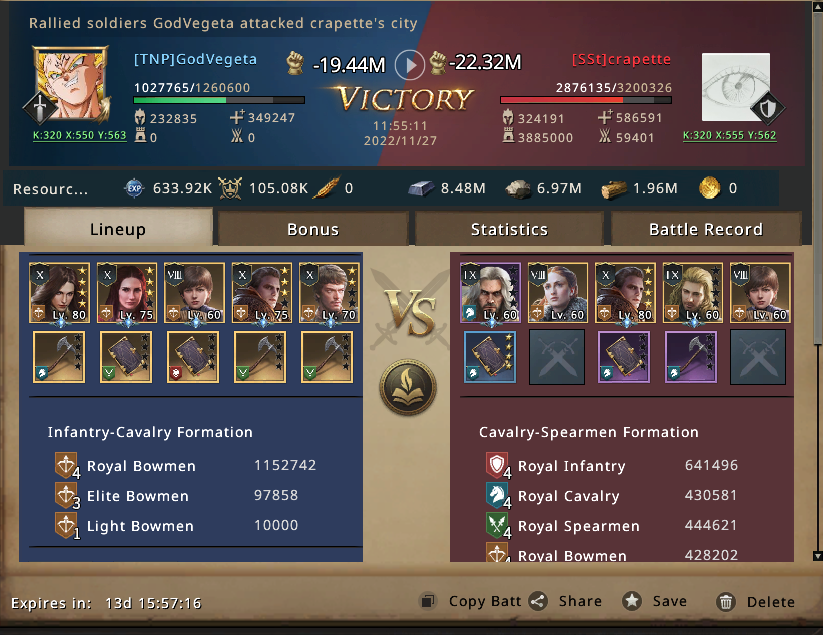 More than 1.1M warriors marched into Lord crapette’s castle. Shoulder to shoulder bracing each other they extended their weapons, launched their arrows and thrusted their spears. Struggling to even breach the front gates, Lord GodVegeta’s troops formed a human shield, stuck their weapons through the tiny spaces in between them like a million of Roman Warriors working together to achieve a unified goal. One synchronized step at the time they pushed and slaughtered enemy troops closer and closer to Lord crapette’s castle gates.

But Lord crapette’s defense was on point, despite the slackery, ue to the immense size of his army. High on his castle walls were an army of archers launching arrows. Due to their position Lord GodVegeta’s shields were ineffective, and his troops were suffering massive casualties.

Even so, his troops knew better than to retreat and kept on pushing forward, in a massive stampede of warriors, like a wave of ants all working together to push through a tiny opening.

It seemed like this battle will never end, but 12 hours later, only few warriors were left standing among the sea of dead bodies. These warriors carried the seal of Lord GodVegeta’s castle. The victory was ours! But the cost was great, too great. Even though the victory was won, Lord GodVegeta’s attacking army was no longer able to proceed and so, after pillaging Lord crapette’s treasury, Lord GodVegeta had to retreat in order to heal the wounded warriors and rebuild his army.

This was a battle that was tougher than any battle he faced so far in this kingdom. With many casualties, but still victory won, Lord GodVegeta smiled, as his army entered his ship and sailed back towards his castle. This was a hard victory, with not many survivors, but he knew, those who survived, will be the leaders of his new army, armed to the teeth with experience and having survived the toughest battle they will train his new army 10x stronger than the last one. Despite the losses, knowing this, he smiled as this was victory in more than one ways. 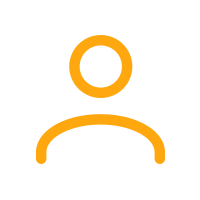