To determine the opponents of the first match of a new season the matchmaking system will use the Alliance Score ranking in combination with the chosen timeslot.

This season the Alliance Score rankings were the following before the pairing of the first match was decided: 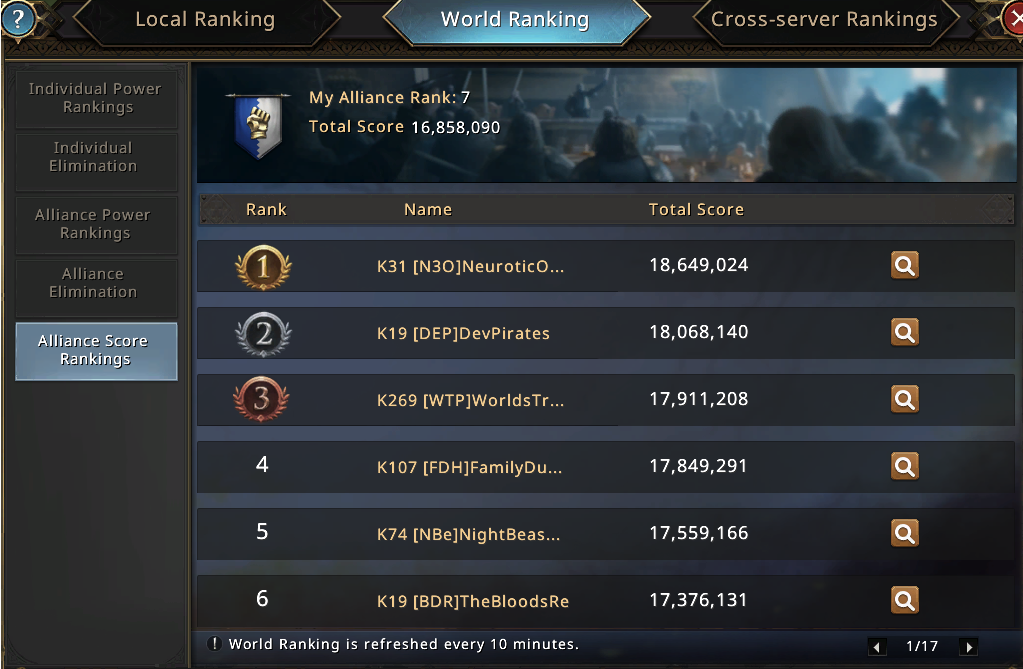 Here you can see that only N3O, NBe, BDR and my alliance (which is ranked as 7th) are the only 19 GMT time slot alliances. So in the first match of the new season N3O faced NBe, while BDR faced us. It plays out in the exact same way for the alliances in another time slot.

After the first match finishes the focus for matchmaking shifts to the Alliance Conquest points ranking, which is the following: 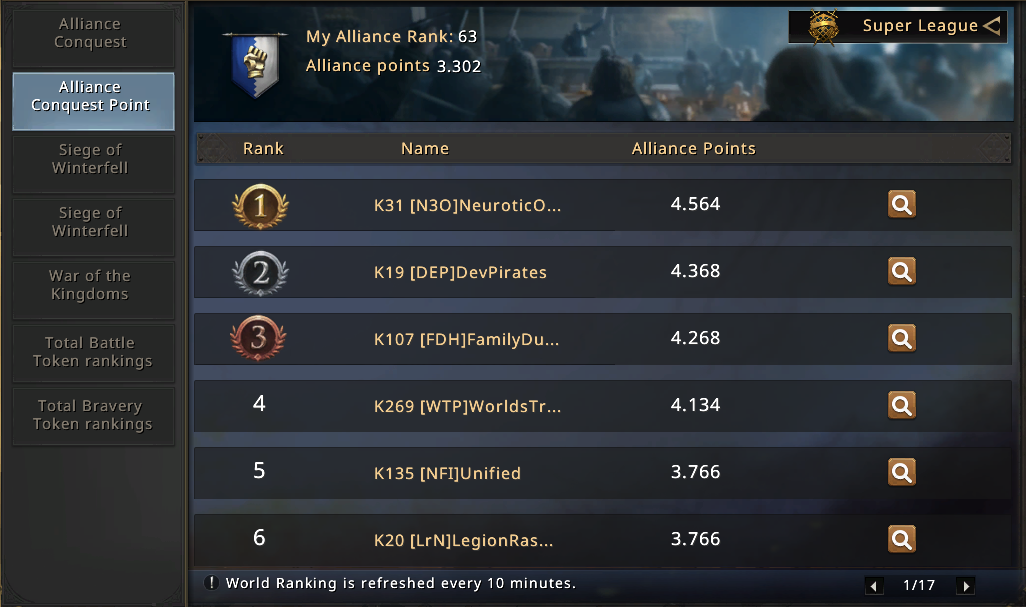 Now the algorithm will match your alliance with the alliance that shares the timeslot with you and is next to you in points and it will stay this way for the rest of the season.

There is one exception though: If you faced the alliance which is closest to you in Alliance Conquest points already in your latest Alliance Conquest match, then you will get the second closest opponent regarding to the ranking. This is implemented to avoid having the same alliances face off against each other too often.

When owning a building in Alliance Conquest the person holding it is the deciding factor when calculating the amount of defending troops. This is set to 1.000.000 soldiers plus the person's rally size when taking the building. So the amount of defending soldiers would be around the size of a rally if the owner of the building would start a rally with 1.000.000 of his own soldiers. Great city rally size will NOT affect this.

One pair of buildings does not only award points while holding them, but also launches NPC rallies on a chosen building. These buildings are the strongholds.

This building launches a rally on another building every 3 minutes. The owner of the stronghold can decide which building will be the one getting attacked. In this case the rally size of the owner does not only determine how many troops will defend the building when being under attack, but also the size of the rallies the stronghold is launching. It will take the owners' rally size (without the added army size on top) and multiply it by the factor 1,2 to calculate the size of the regiment getting deployed. On top of this the regiment will receive 80% of the owners battle stats and the deployed troops will be of the highest tier the owner has unlocked.

The mines are awarding points based on the amount of deployments currently reinforcing the mine. This makes it really important to fill up the number of maximal deployments when securing a mine.

Contrary to other buildings the mines have a maximum amount of 14.000 points that can get awarded to alliances holding the mine. After a mine awarded a maximum of 14.000 points in total (it does not matter which alliances got how big of a share of this) occupying the mine will not award any more points for the rest of the match. So it can get disbanded.

The mines are the building with the most impact because they can cause a huge swing in points if an alliance can hold on to both of them.

Another important feature of the Alliance Conquest are the stratagems. Those are divided into two types: Active and passive stratagems.

The passive stratagems are active during the whole match and do not need to get activated.

The active stratagems need to get activated, provide a buff for a short period of time and go on a cooldown afterwards.

An alliance can choose 3 out of those 6 stratagems for a match.

The active ones are:

The passive ones are:

But what about different leagues?

There are three different leagues when playing Alliance Conquest, S-,A- and B-league. The S-league is the most competitive one while the B-league is the lowest of the three. If you make the playoffs in A- or B- league your alliance will get promoted to the higher tier while finishing a season as one of the lowest ranked 16 alliances in S- or A-league will cause a demotion to the lower league.

So if a player's individual level is higher than the alliance's league level the player will receive a malus on his battle stats depending on what the difference between the tiers is.

If an A-league player competes in an B-league alliance the stats will get reduced by 25%.