This system release for this game is a very big one and has tons of customization and ways to go about it and can get confusing but I will do my best to guide you through it to the best of my ability. The system unlocks at level 360 and comes with a daily feature called Endless Trial Seen below from the Trial instances tab.

The system unlocks at level 360 (on servers older than 15 days) and comes with a daily feature called Endless Trial. Seen below from the Trial Instances tab.

From here you get 3 daily attempts to advance just like most other trials and you receive Holy Flame Crystals every attempt along with a first clear reward if it's the first time you beat the stage which consists of chests with Demon Equipment in them as well as more Holy Flame Crystals.

Now diving into the actual system. Once opened you will find four tabs at the top 1) Demon Equipment, 2) Monster, 3) Thirsty Demon, 4) Spirit. Let's go through them in descending order.

1. Demon Equipment You will be met with something that looks like the talent trees but more funky like some sort of ’’Talent Map’’. There are 4 different talent trees to specialize into. 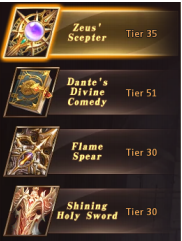 All of these talents upgrades tons of different stats similar to the punishment tree most of you know about already but have some differences.

Zeus Scepter is probably the biggest stats bomb which upgrades a wide variety of stats and finishes up by the end of it with an EXP Booster.

Dante’s Divine Comedy is a tree that focuses more on damage than the other trees but has tons of other stats included in it as well though more so on overall damage output.

Flame Spear has slightly less damage opportunities in the tree than Dantes tree but it comes with a self instant heal and a damage reduction buff for 8 seconds to boot when your character gets low on health. ( Has a cooldown )

Shining Holy Sword is the defensive tree and is VERY similar to the Flame spear tree but focuses more on the defensive aspects while the Flame spear is slightly more on the damage side. It finishes up with another Instant self heal when your character reaches half health along with a total immunity to Critical and Deadly critical receiving hits for 8 seconds. ( Has a cooldown )

You get one point to allocate for every 10 tiers you have upgraded in the respective talent tree you chose to upgrade. (Example: Tier 60 on Zeus Scepter would give you 6 points to allocate in that tree)

It costs 500 gold to reset one tree at a time if you wish to allocate points differently and it costs 50 points total to max out a tree.

You will be using the Holy Flame Crystals to upgrade the tiers for them. And they can be obtained by doing the Endless Trial, Spectral Realm and Various events.

⏬ All talent trees yield these stats when maxed out⏬

In addition to those stats, each talent tree has special stats and effects that make them different: 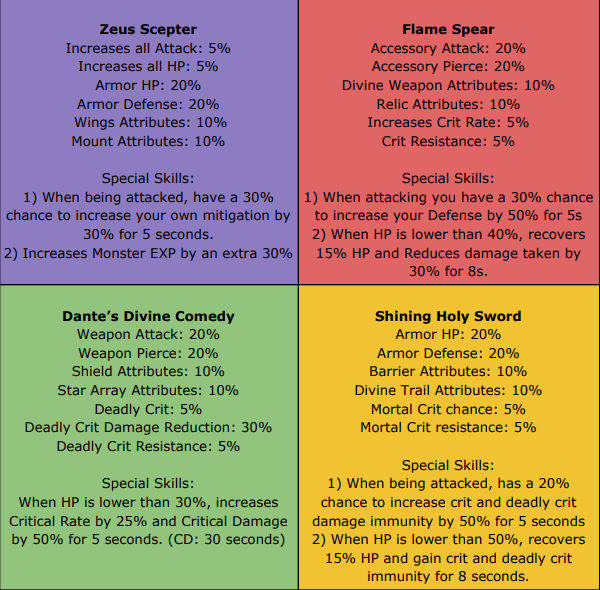 2. Monster This tab uses the previous 4 schools mentioned but instead of allocating talents for the tiers you have upgraded into them ALSO unlocks slots where you can insert the items into. Each of the 4 schools have 8 slots of items that can be inserted and none of the same item can be inserted in several slots which means there are 32 different equipment that can be found in the game. The equipment tier determines how much stats and BR they will grant you but also the quality of the equipment influences the stats. 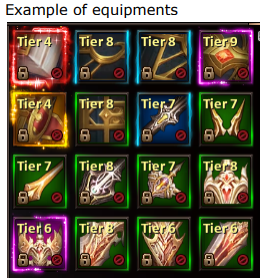 The Zeus Scepter is the only school that you unlock all slots merely by getting it to Tier 35. The other 3 schools all require up to Tier 240 to unlock all slots. These equipment grant a humongous stat boost and BR 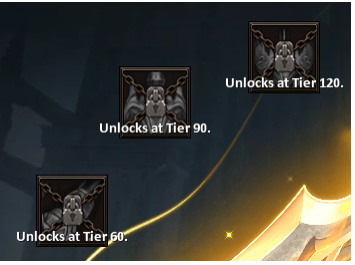 For easier navigation I have compiled a list of the item names and which type of school they belong to below:

3. Thirsty Demon In this tab you eat up/recycle Demon Equipment to gain two pieces of material. You get more material depending on the rarity of the item. Spirit Exquisite Soul - Is obtained by recycling any equipment. Spirit Gold Leaf - Is obtained by recycling Purple rarity equipment or above. You use these two materials in the next tab: Spirit.

4. Spirit In this tab you use the previously mentioned material for an increase in stats and various buffs that are activated in combat. The Exquisite Souls are used here: 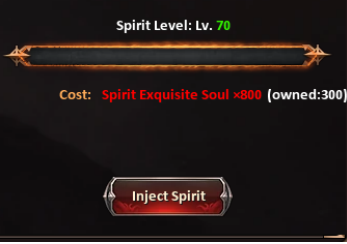 It's just giving you general BR and stats each upgrade but they do matter because of those 5 orbs you see in the tab as well since these orbs are only unlocked and can be activated and upgraded once your spirit in this tab has reached the appropriate level for them. As you can see below: 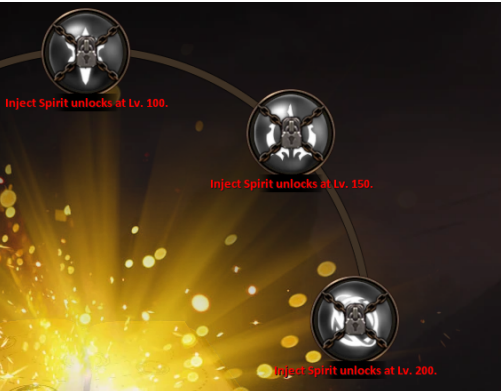 This is a cross server event that you can join at 20:00 server time (Monday through Saturday), exception being it is closed on the 3rd day of a newly merged server to avoid overlapping with the Battle Royal City.

You are placed in a map that consists of 8 bosses with a level range depending on the world level your server has.

You fight it out amongst the other servers similarly to Hell's Boundary and it has an affiliation system implemented as usual.

The affiliated player will receive more items, not better items. The item tier and quality remains the same. And the higher level the boss is that you manage to take down the higher tiers the equipment drops will be.