Here are all the FAQ that we collected, hope they can solve your problem! 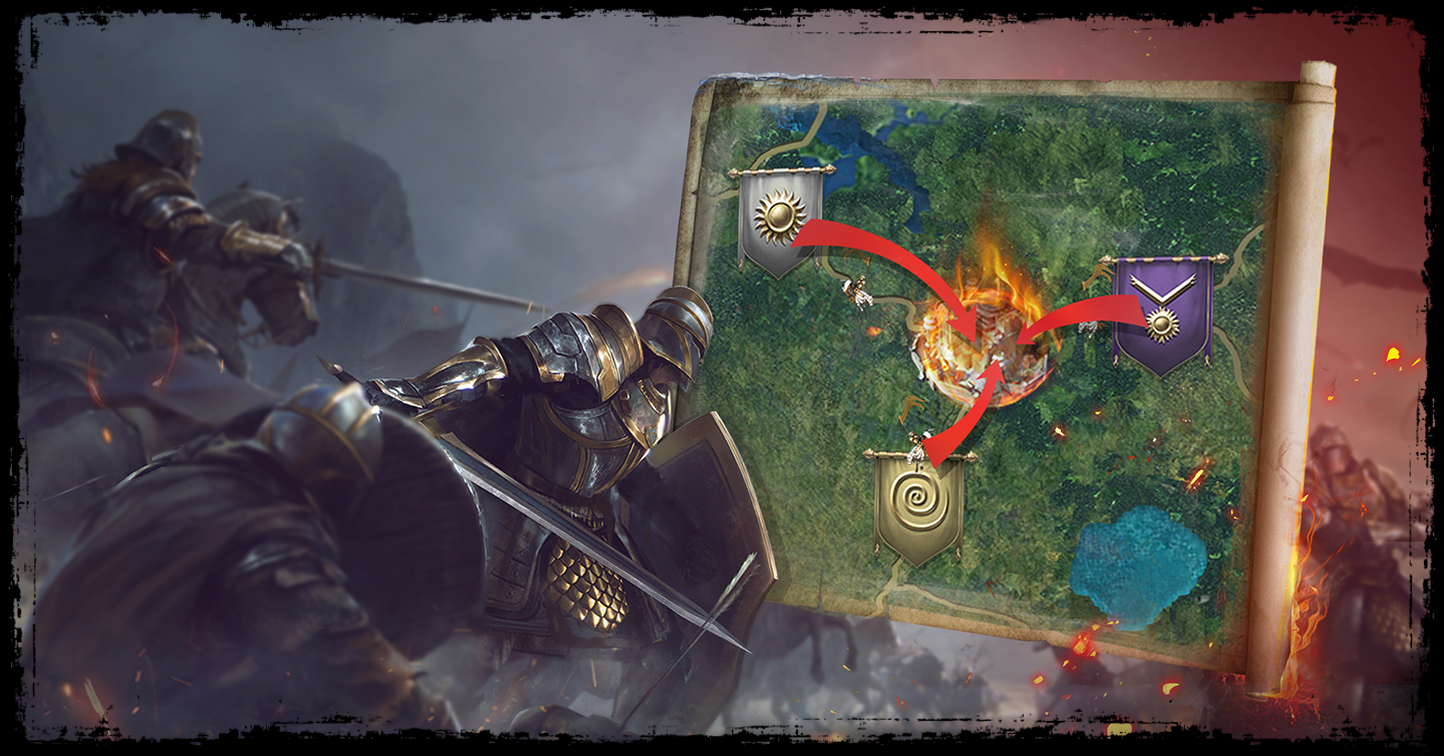 The cross-server real-time PvP event All-Out War brings an immersive city siege which is quite different from the previous Castle Siege. How are you doing in the new event?

We’ve listed some of the frequently asked questions and hope they will help you better understand the event.

1.How can I gather the resource?

A: Resources can be gathered outside cities at Wheat Fields, Silver Mines, Brass Mines, and Obsidian Mines. You can’t gather resources without bringing resource chariots.

2.How can I produce Chariots?

A: The faction commanders can start production quests in the Armory. And you can contribute by sending your troops to join the production line.

3.What does “Rebuild” mean?

A: Villages need to be rebuilt after being occupied, then you can continue to occupy the next villages or cities along the way.

4.What's the benefit of rebuilding villages (besides getting faction points)?

A: You can’t continue to occupy the next villages or cities along the way if you don’t rebuild the village after occupying it.

5.How to rebuild villages?

A: When a village is occupied, it will be available for the state of rebuilding. Click the ‘Rebuild’ button and send troops to rebuild village.

6.How to complete the building construction quest?

A: By sending troops to rebuild villages. Please pay attention to changes on the battlefield.

7.How to restore resilience in the village?

A: Currently there are three ways that you can recover your resilience in villages.

Firstly, your deployed troops that carry Wheat can restore Resilience in the nearby village.

Secondly, when you are in Logistic Military Position and bring Wheat with your deployed troops, you can help allies recover Resilience. Thirdly, you can dispatch them again after disbanding the armies in the Military Cities or your faction.

8.The cost of replenishing 1 resilience is 1,400 wheat, but will this wheat be consumed in the nearest city or what?

A: It will consume the Wheat the troops bring. The wheat needs to be taken from Warehouse in a nearby city (the troops must be near the Warehouse).

9.Recover ally resilience feature applies to yourself as well?

10.How does the Rallying works? Can we rally the gate or only the center building (Municipal Center) ?

A: You can use Offensive vehicles or Positional Chariot to initiate a rally. Yes, you can rally the gate. Rallying means to gather a huge troop that the rally initiator can control as they wish.

11.How to control more than two armies in a rally?

12.Does healing only restore "normal" troops, not the boostered ones?

A: It can heal both troops that you’ve mentioned (notice that healing will not increase the damage).

13.Do I have to use my own resources to heal troops in All-Out War?

A: When you carry Medic Vehicle with your troops, you can use your Wheat to heal troops for allies. Only deployments with Medic vehicles can help allies heal the wounded.

14.How can a declared struggle against the city be cancelled?

A: Sorry, there is no option for players to cancel it.

A: Choosing the Logistics Position gains 1,000% of Total Defense and Total Health, but does 70% less damage.

16.Is there any way to examine stocks in remote Warehouses?

A: When adjusting resources, you can check out the stock by clicking the corresponding Warehouse on the game interface.

A: The arrow tower will automatically attack only when it’s within the Archer Tower’s attack range during the declaration period. Arrow Towers currently have a lower range than Eagle-eyed troops.

18.Since the eliminations got reset, will the troops also get returned that people lost in All-Out War fights?

A: All the troops in All-Out War are given away by the system and can only be used in All-Out War. They will not die, and severely wounded soldiers need to be healed before they can be deployed again.

19.Does this mean that the starting areas are safe for the entire season since the gates to the starting villages, in theory, cannot be declared upon by enemy factions?

A: Yes, the starting areas are safe for all the players.

A: Yes, they all count in All-out war.

21.My gathering gear is increasing my time in node, not decreasing?

A: This is because the gathering gear increases your Army Carrying Capacity. Hence you can gather resources to a higher limit, which takes more time to gather resources.

22.We are unable to declare war on a building or a village but we have adjacent buildings. Am I missing something?

A: Faction commanders can declare war against enemy cities that have adjacent allied buildings nearby. If you still can’t declare war, please don’t hesitate to send a ticket to our Support Centre.