[News]Battle of Essos: Join the Battle and Help Daenerys Free the Slaves!

Daena made her debut in the Night King Invasion and will play a very significant role in the coming Battle of Essos. With the loss of her husband Khal Drogo, Daenerys finds it difficult to handle the situation alone and has requested aid in conquering Essos. Will you embark on the journey to explore the unknown? Check out the preview below before you go to the Essos Battlefield.

1. All players in Kingdoms that have been open for more than 40 days can participate.

2. All players who enter the Essos Battlefield during the event can participate.

Click “Battle of Essos” icon on the right upper corner of the game interface.

*Please note that the Battle of Essos event is a one-time-only event. Don't miss out! 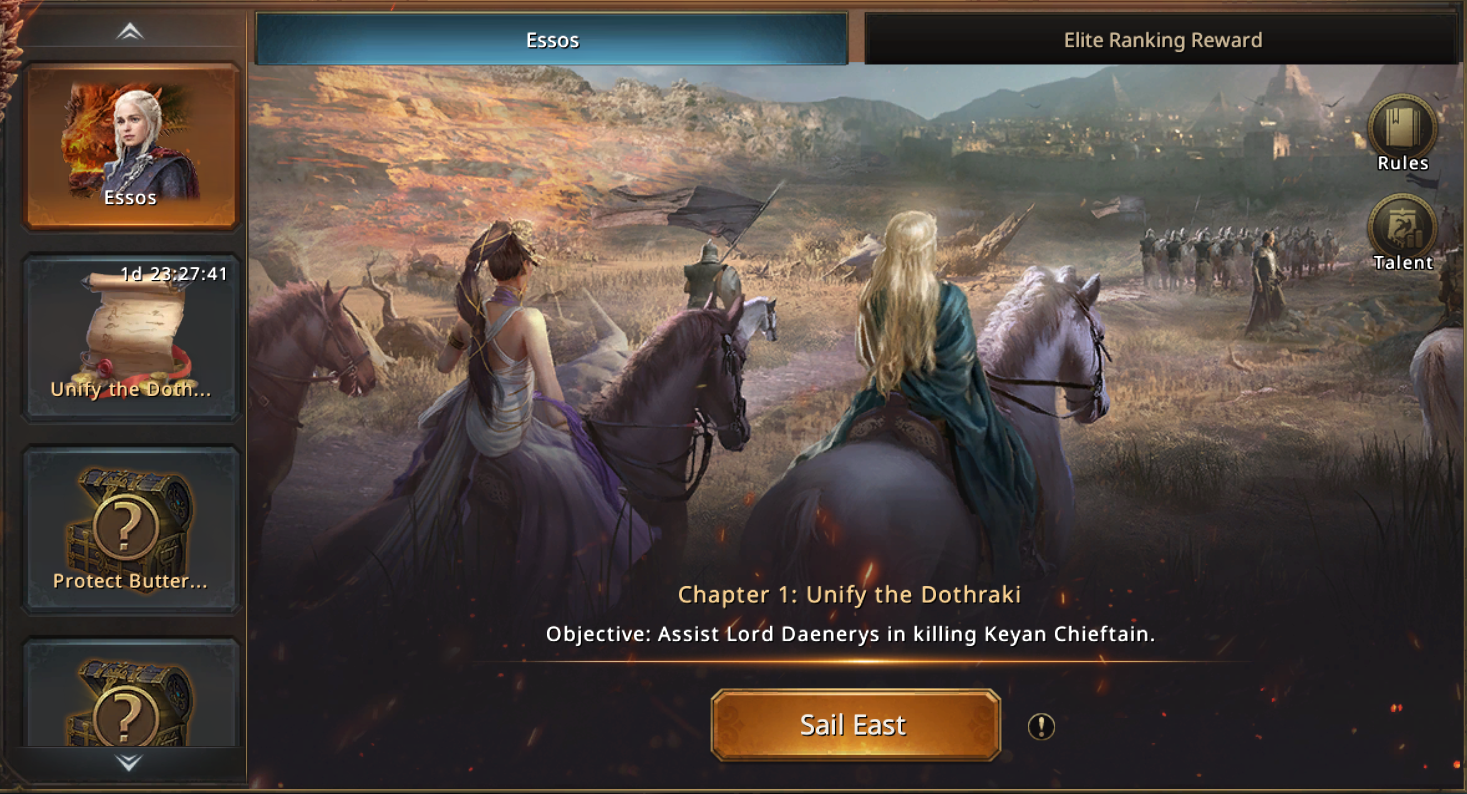 1. Lords engaged in battles against enemies on Essos will be blessed by the Seven. 90% of the troops lost in battle will be resurrected, and the Casualty Rate of the remaining troops is 10%.

1. Four chapters will be unlocked sequentially throughout the event, with each chapter having their own quests.

3. Upon entering the next act, the Chapter Quest will refresh and show. Rewards will be sent out via mail at the end of the chapter.

Assist Daenerys in killing the Keyan Chieftain within the designated time limit.

A Dothraki tribe will have a Truce enabled. When you defeat a Khal neighboring a region under another's influence, the Dothraki tribe in the next region will end its Truce and engage in war against you and your allies.

Log into the game and discover more in-game during the event!

Chapter 3: Save Bay Village --To be unveiled

Chapter 4: Liberate Essos --To be unveiled 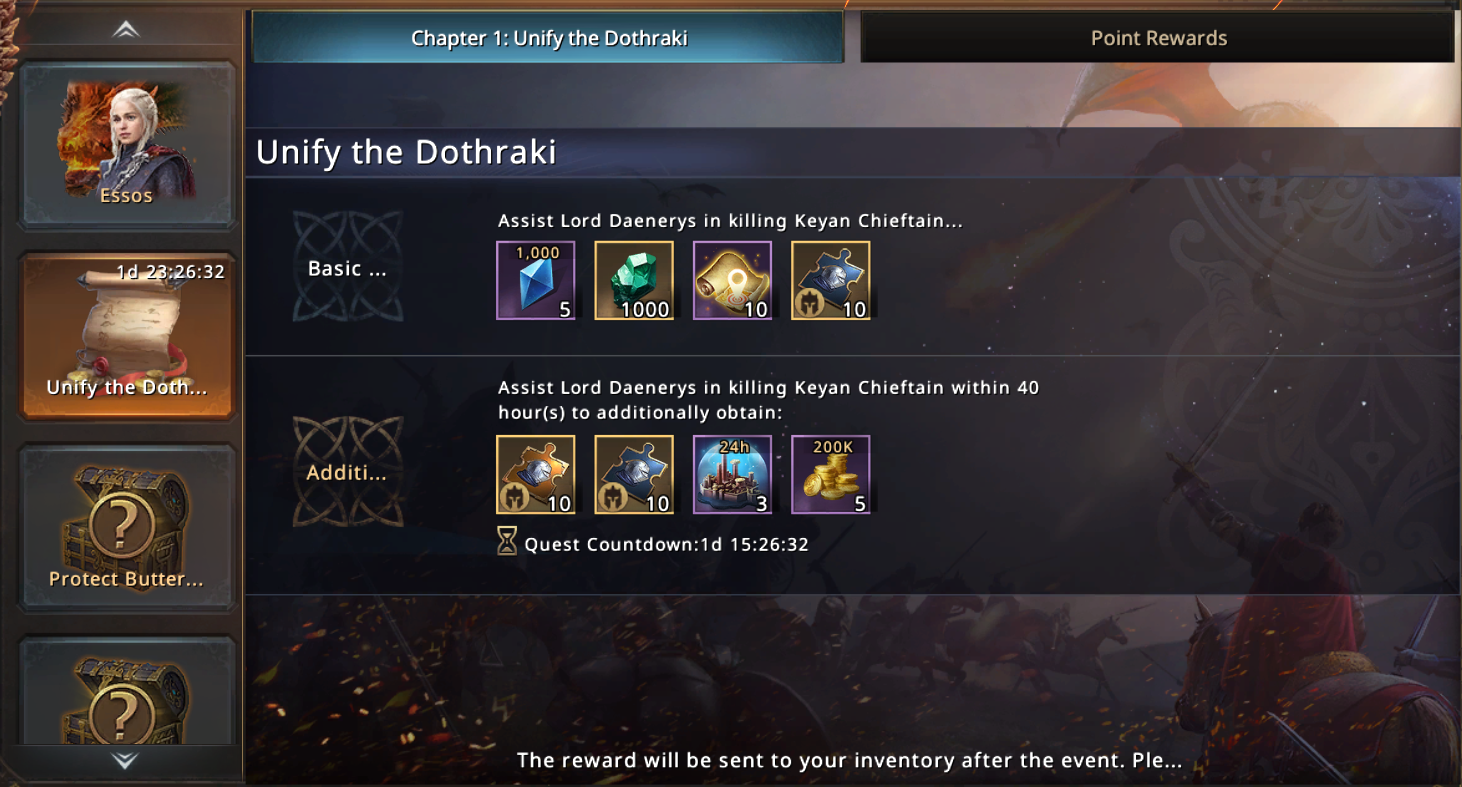 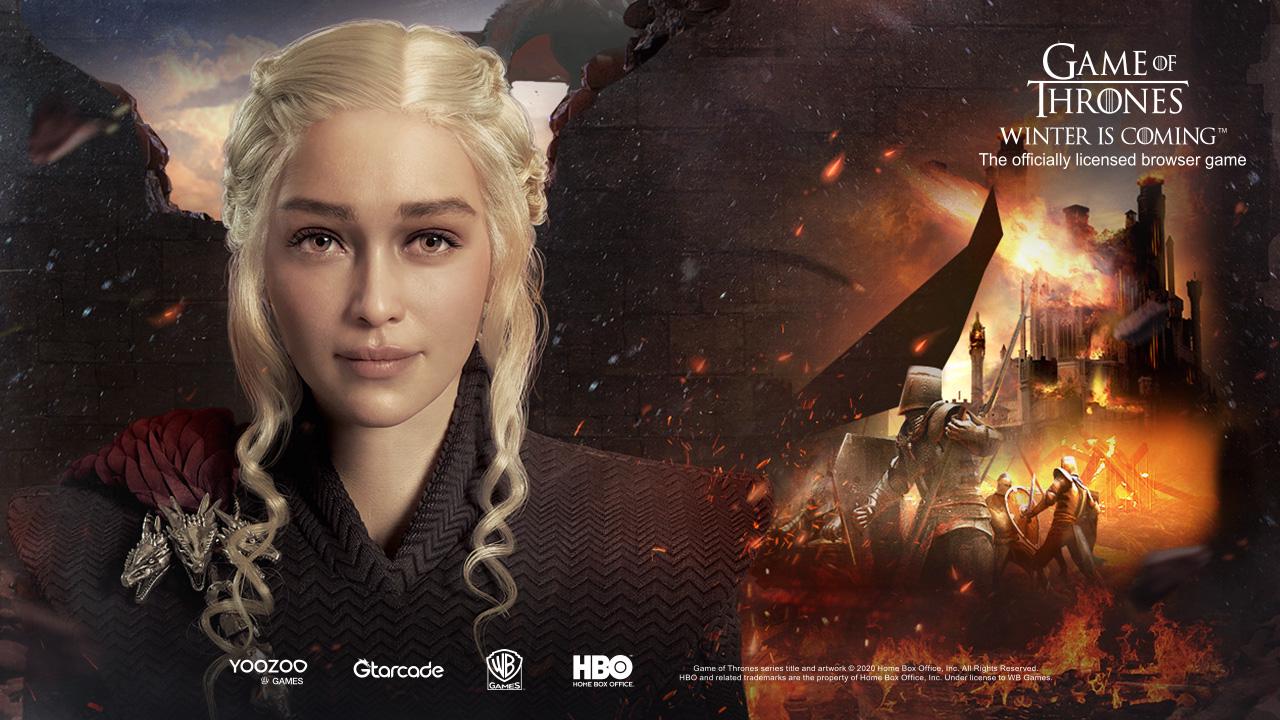 1. As the event progresses, various factions will appear on Essos. 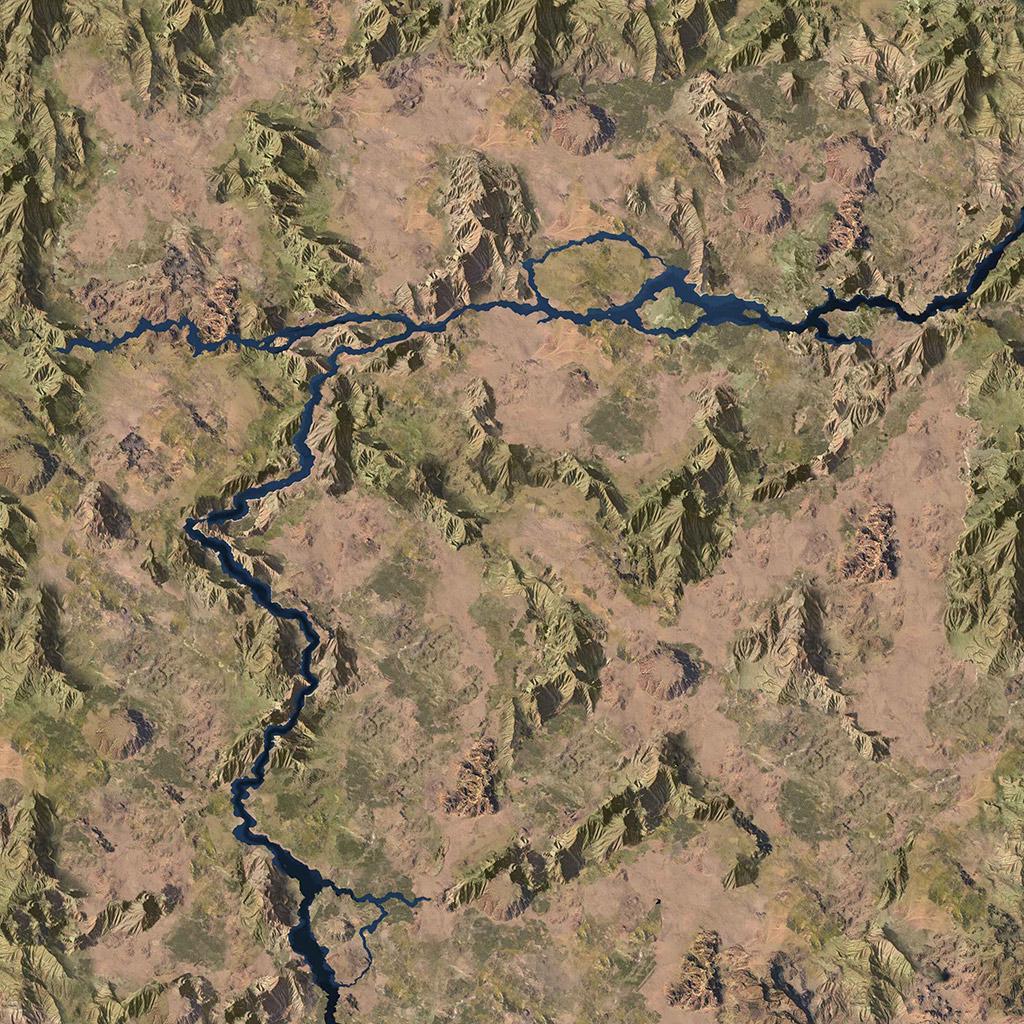 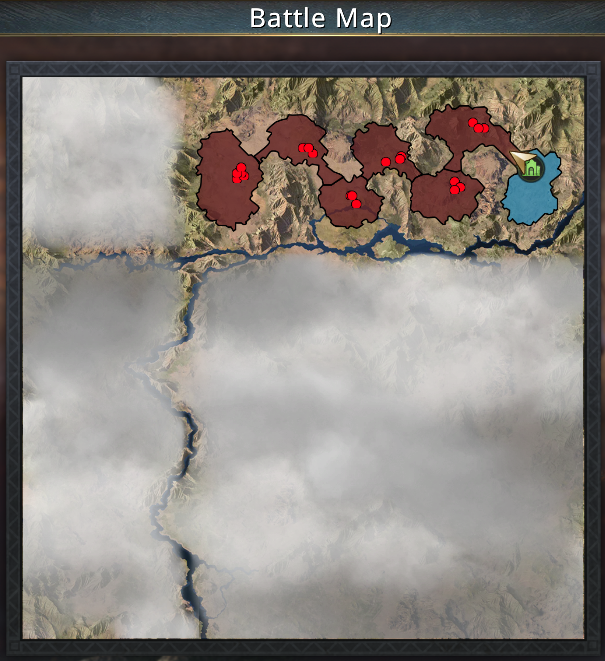 Essos Talents only take effect on the Essos Battlefield.

You can obtain Chapter Quest Rewards, which include Basic Rewards and Additional Rewards after you meet the requirements.

The popular Night King Invasion Castle Exterior will be available, as well as various items and resources. 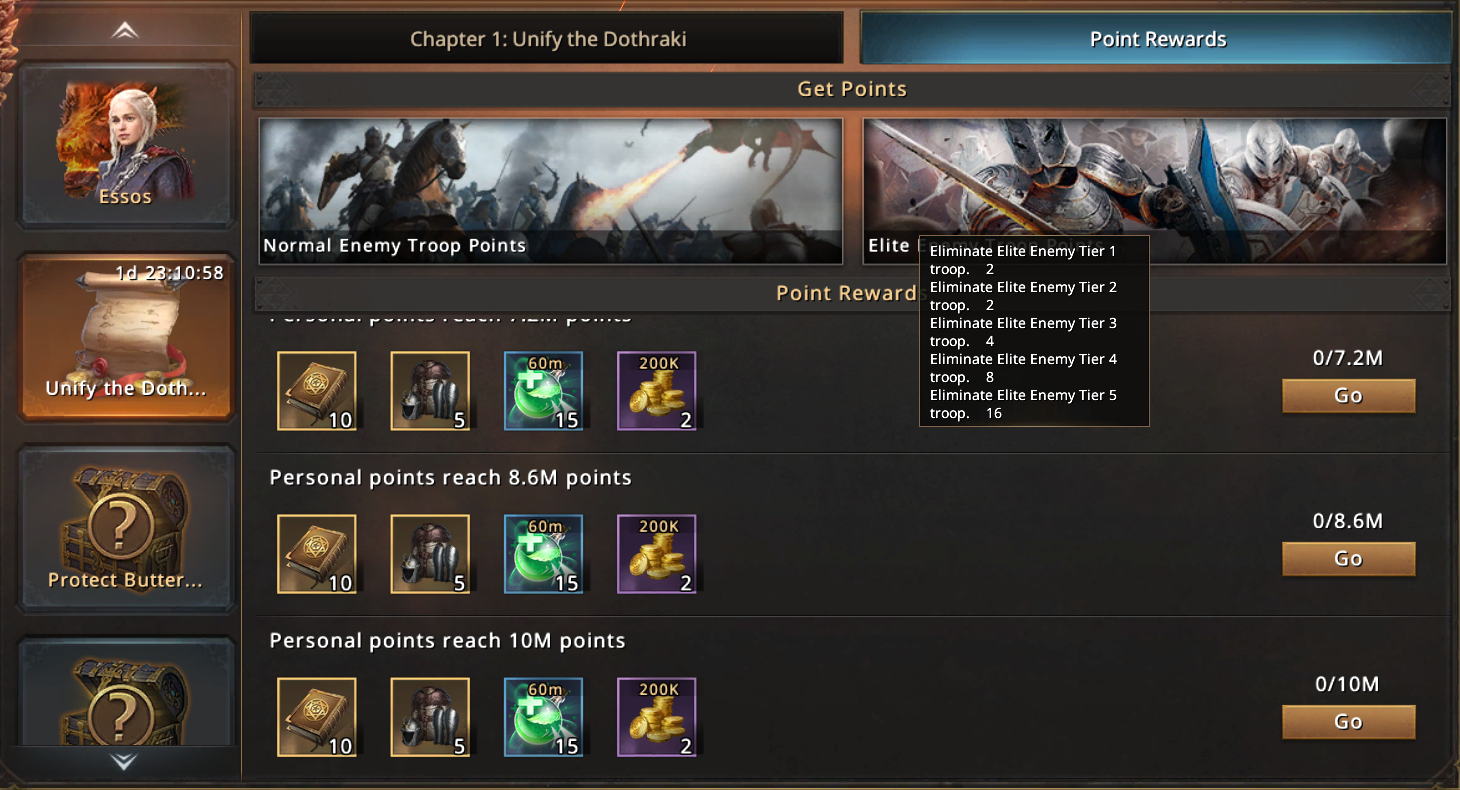 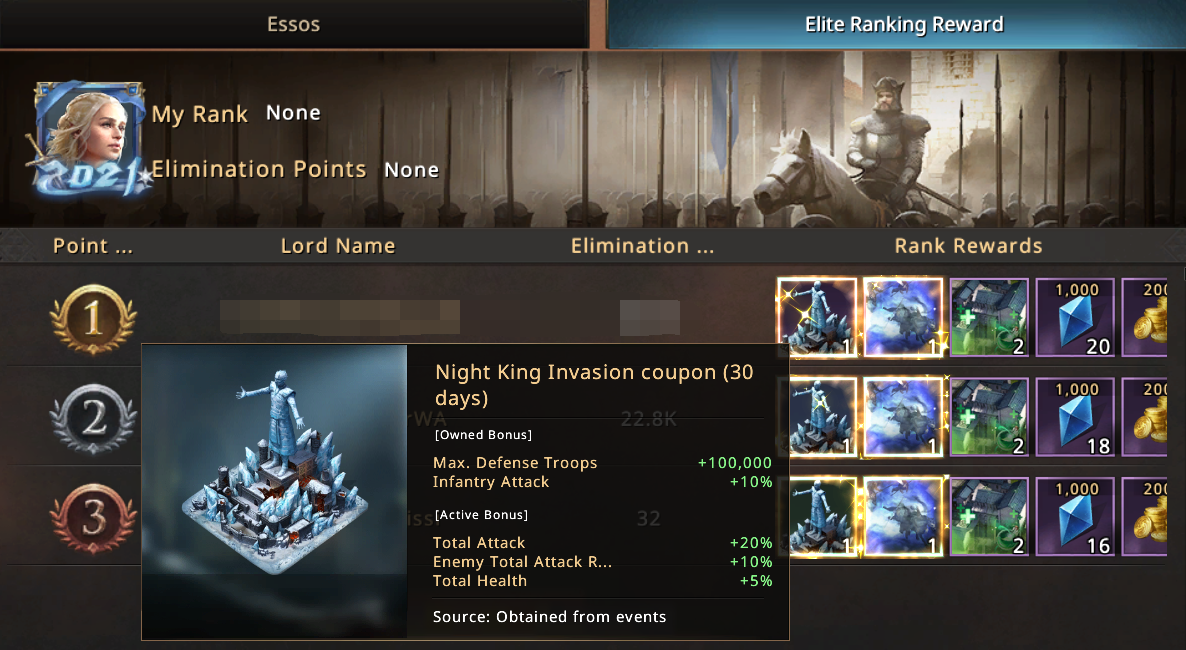 1. You can check out the coordinates on the map.

2. Please pay attention to the countdown of each chapter and complete tasks.

From Jan. 21st to Jan. 27th, join the 7-day Battle of Essos to help Dane and Daenerys free the slaves!