[News]All-Out War Rules: Check out the Rules and Get Prepared!

To win the Dragons' recognition, the drums of war have been beating again.

Requirement: Players with castle level 17 or above.

Your troops will NOT die in All-Out War. All participants will receive 10,000,000 soldiers that they can freely demand. You can select any troop types that have already been unlocked and send them on expeditions when they are deploying troops.

Changes in a Lord's upgraded attributes will NOT affect troops that have already been deployed on expeditions.

All All-Out War Speed Up items, Water of Revival, and Return to City Runestones that Lords own will expire when the current season ends.

Even if a lord is captured in Westeros, Lord deployment will remain UNAFFECTED in All-Out War.

The Army Size buffs from the Sept of the Seven will NOT take effect during the All-Out War.

Moving speed in All-Out War is similar to that in Siege of Winterfell.

If some Commanders do not cast their votes, they will be considered as having voted to reject impeachment.

Blacklist: Commanders can block a certain non-Commander Lord of the same faction in Warehouse or Barracks. Upon being blocked, the Lord will not be able to claim faction resources from the Warehouse or deploy troops from the Barracks.

Video Guides: You can check out the chronicle video guides here>> https://forum.gtarcade.com/topic/76804 (Please note that the guides are based on the Pioneer version and don't represent the final version.)

Take a look at the event schedule and detailed battle rules below. 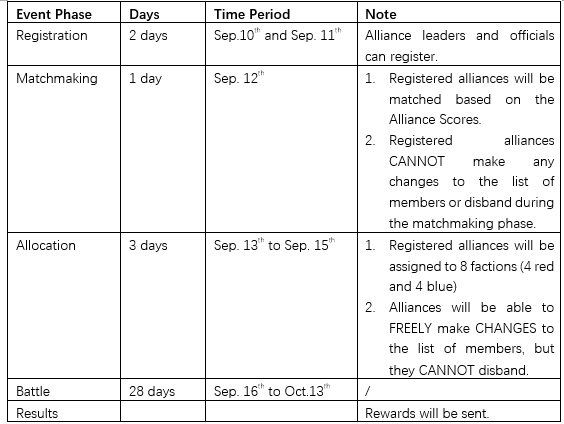 Please note that the above content might be changed due to the changes of the development plan. Final updates will be determined in-game.