Getting 60k pts at last!

Match four of the twelfth Alliance Conquest has just raised its beady little eye! Time for all players to raise their game to collaborate with their fellow alliance members to fight for glory and show their loyalty to their alliance. In this particular exciting case, ACM are facing Coven or cVn. Coven is an alliance from the kingdom known as K43 from the ,and of Westeros in the browser game, Game of Thrones: Winter is Coming.

The main aim of the game is to earn more points than your opposing alliance, in this instance for ACM it’s cVn. Earning points in Alliance Conquest can be daunting at first for new alliances or new players as well as new leaders. To obtain points, there are plenty of different ways a player can earn them. Sending an army deployment to a building on the AllianceConquest event map is a sure fire way to occupy a building either as an individual player or as part of a rally. Individual players can obtain buildings as a solo army deployment if their troop appearance and numbers are sufficient. If troops are killed by the opposition alliance at buildings, the players involved earn extra points for the healing or elimination leagues which are part of Alliance Conquest. Typical rewards from these matches are Valor points which can be spent on other rewards in the token shop such as Simon or Mengo medals. There are several different buildings for players to occupy and others of the same alliance can reinforce the building once it is held by a fellow player. More rewards can be earned for an alliance after twenty thousand point increments up to a maximum of eighty thousand points, a great way to develop the second dragon, Darkfyre rapidly through its growth stages.

For the fourth match of Alliance Conquest, ACM chose the time slot of 0700am server time. During the inevitable thirty minutes registration time, between 0630am and 0700am server times, this is when interested players from both participating alliances join the match and can devise their strategy based upon the number of players participating and any prior knowledge of the opponents. Some alliances have already planned their strategy beforehand such as which players will do which role in a match. In this match of Alliance Conquest, ACM had twelve players whereas cVn had four players. With this number, ACM felt that they stood a good chance of winning the forthcoming match.

So onwards and upwards for ACM at this point so let’s go! Image 1 below reveals that ACM were extremely quick off the mark after less than a minute by capturing three buildings: an outpost plus the two temples. Capturing and holding the two temples: Temple of the Mother and Temple of the Warrior enhances an alliance’s ability to continue to hold onto the other buildings on the Alliance Conquest event map more easily as they both give bonuses to the alliance. 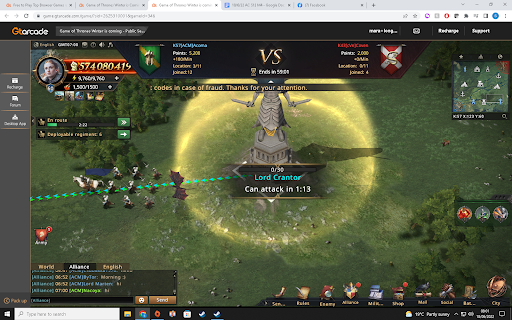 Image 1: ACM has 3 buildings in less than a minute!

cVn then captures a building too by a minute too. Four minutes later, ACM’s Duke Nacoya captures a port which is replicated by cVn. cVn are not deterred by their lack of numbers which makes playing the match a lot more exciting as time progresses. ACM ploughs onward by gaining another building and so does cVn. A point to remember during Alliance Conquest is that cVn can only hold onto four buildings as they have only four players playing. At 0711am server time, ACM has earned ten thousand points whereas cVn has scored five thousand four hundred points so far. Five minutes later, Lady Acoma strikes by adding a stronghold capture plus Lord Crantor of ACM captures the other stronghold. What a team ACM are! By holding several buildings, ACM then reaches fifteen thousand points a minute later. Yay! cVn then loses their port to ACM four minutes later which is fabulous news for ACM.

Burning the opposite alliance’s castles is the next move of ACM’s. Burning an opposing alliance’s castles is another way of obtaining points in Alliance Conquest. After twenty minutes of play, the castles of all players participating in Alliance Conquest unlock so more points are available for both alliances to earn. No extra points are earned for burning castles after the first time of attacking them unless it is to eliminate the player’s troops which will give the individual who is attacking elimination points only and the player who has lost troops can heal the troops thus earning points in the healing league aspect in Alliance Conquest (Image 2). 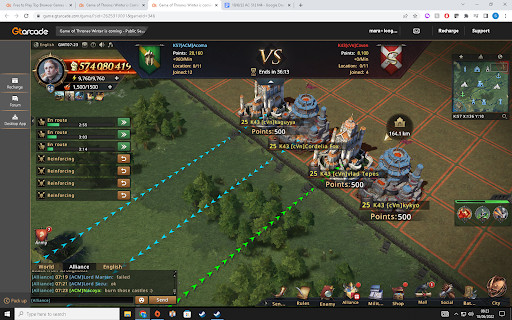 Time ticks on and there is now less than twenty minutes left of the fourth match of Season 12’s Alliance Conquest. Duke Nacoya has requested that all players hold their buildings and earn as many points as possible. At this moment in time, ACM has earned thirty-five thousand five hundred points and wants more! All buildings are occupied by ACM at 0745am server time when the mines open and are rapidly captured by ACM. ACM has also earned forty thousand points too. Nacoya withstands eight valiant attempts by cVn to capture the building held via rallies. Two minutes later, ACM has captured all available buildings in Alliance Conquest, magnificent play! One building was captured by a new player at ACM called Lady Oumua which was her first one ever (Image 3). Well done Lady Oumua! 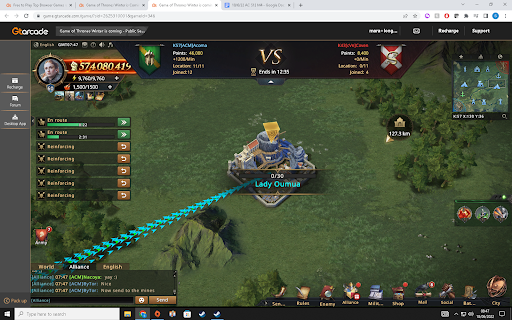 At 0752am server time, ACM still has all buildings and has destroyed enemy troops who are not healing at all. A minute later, ACM are earning a massive two thousand and forty points per minute due to every player deploying an army to both of the mines. At last sixty thousand points are reached by ACM with five minutes spare (Image 4). Congratulations to ACM!

Thank-you cVn for the match and good luck in the rest of Season 12’s Alliance Conquest. 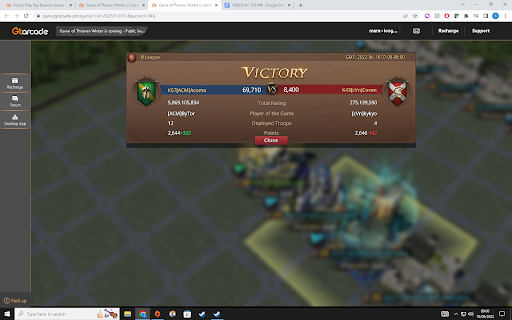 1
The high price that BDR is paying - ATD the enemy that never forgets.
45 discussions 164 views
2
The legend who lowered his head for his allies- The real story of ATD invading RUI
28 discussions 127 views
3
The Brave Bowman of Frost Faction
36 discussions 91 views