[News] Rules That You Should Know Before Entering the Glorious Battlefield

We are more than excited to introduce a cross-server multi-kingdom event, Glorious Battle, in the latest update. Several KINGDOMS will be matched to form one FACTION and fight against another faction FOR THE CONTROL OF CITIES in a NEW EVENT MAP for 28 days. Only factions with the GREATEST INFLUENCE will be crowned ultimate champion and be able to enjoy endless wealth and glory. The testing season of Glorious Battle will open on July 26th. Read on to know more about the complicated and thrilling event.

1. Only kingdoms that are opened for more than 30 days.

2. Only players whose castle has reached lvl.25 can take part in Glorious Battle.

Before we move to the detailed battle rules, here’s something that you need to pay attention to.

All Marching Bugles, Glory Points and Administration upgrade progress owned by lords and all Supplies and War Horns owned by factions will be cleared after the end of the current season.

Troops will DIE in Glorious Battle. But because of Blessing of the Seven, 40% of all lost troops will be revived. The remaining 20% will die, but the death rate may be lessened based on your Administration, Military Position, City and Dragon Skills.

Lords will NOT be captured in the Glorious Battle.

The Army Size buffs from the Sept of the Seven will not take effect during the Glorious Battle.

Note: You can check out the chronicle video guide here>> https://www.youtube.com/watch?v=heJ17P_Un4E (Please note that this doesn't represent the final version.)

Take a look at the event schedule and detailed battle rules below.

A season of Glorious Battle is divided into 3 phases: Matchmaking Phase, Battle Phase, and Results Phase.

- Matchmaking in Glorious Battle will be done based on kingdoms.

- The matchmaking will be carried out by the system automatically based on the number and power of active lords of during the matchmaking phase.

- When the Matchmaking Phase ends, the matchmaking results will be announced, and 4 powerful lords from each kingdom in the faction will be chosen as the commanders for this season. They will have their own war chat room for discussing tactics.

- About the 4 powerful lords: the Alliance Leader and officials of the Alliance top in the Alliance Rankings. If some of them are not in the kingdom concerned, the person who ranks at the top of the Individual Power Rankings will be the replacement.

- Lords can find out who was the most powerful faction on the battlefield from the results screen after the Battle Phase has ended.

Each Military Position has its own duties. Therefore, lords have to play to their strengths and work together to maximize their faction’s power.

- The Administration System is divided into 3 branches, each corresponding to the 3 Military Positions: offensive, defensive and logistics. Lords can reset Administration by spending 1,000 Diamonds. 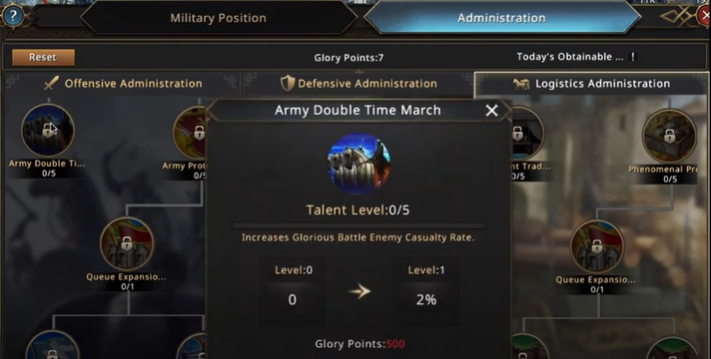 There are 8 factions in Glorious Battle. Each faction has their own banner. The goal is to occupy cities (both the size and quantities matter) and obtain as much INFLUENCE as you can for your faction. Whether cities are connected by roads will greatly affect the attack and reinforcement.

-The different types of cities have their own special features in Glorious Battle. Only the leader of the strongest faction can sit on the throne of the Glorious City. Based on your faction's strategy, lords should select cities most suited to your faction to attack first.

- In Glorious Battle, lords can change a city's attributes by CONSTRUCTION in the city occupied by your faction and TRANSPORTING Armament Supplies to that city.

There are 6 types of construction quests in Glorious Battle, as listed below. 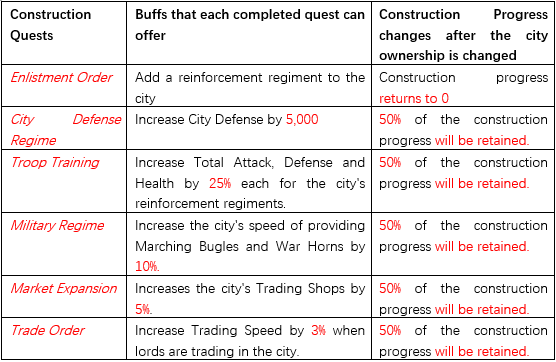 To attack a city, faction commanders have to declare war against the target city first before they can attack it. This is called the City Siege in the Glorious Battle.

- A city can only be declared war against by one faction at a time, and faction commanders can only declare war against enemy cities connected by road to allied cities.

- Each declaration of war uses up one [War Horn]. One War Horn can be obtained periodically, and occupying [Military City] grants additional War Horns.

Note: War declarations cannot be made in a certain period of time before the normal server going offline. Check in-game for more details.

- After entering the Battle Phase, lords on the attacking side can deploy troops to attack the target city, while lords on the defending side can reinforce the city at any time. Each city can have up to 1,000 reinforcements garrisoned at the same time.

- After the attacking troops have reached the target city, they will engage in battle with the reinforcements garrisoned in the city. The losing troops will return to their starting point. The winning troops will stay in the city to wait for the next battle. In the city, 2 battles have an interval of 0.5 seconds.

Note: once the stamina of troops attacking a neutral city has run out, the troops will be forced to return to their own city.

-In Glorious Battle, when lords are attacking, reinforcing, trading, constructing or transporting, a queue is taken up, and a [Marching Bugle] is also used up. Initially, all lords have only one queue. The number of queues can be increased by upgrading Administration.

- Lords can recall deployed queues at any time, but the Marching Bugle used up will not be returned. Construction or transport originally in progress will also be considered as failed. As for trade, partial supplies will be obtained based on the trading time elapsed.

- Troops marching in Glorious Battle need to have a clear path. If, while marching, a city along the path ahead is occupied by another faction, the troops will return to the starting point and the Marching Bugle will not be returned.

- Once a troop departs, further attribute changes will not take effect for this troop.

- When reaching the target city, if the target city status and occupation situation changes, the troops will return to the starting point and the item used up will not be returned.

- You can check out enemies marching on the map.

Take some time to study these rules as they can be quite complicated. But once you figure out a plan tailored by these rules, you will be one more step closer to the ultimate crown throughout the whole land of Westeros!

1.Rewards will be revealed in the Rewards Introduction .

2.Some screenshots are from chroniclers that help test on the pioneer server. Thanks to the contribution.

Check out the video guide here↓

*Note: Final rules are subject to change in later seasons.