Sorry it's been so long since our last update, but we're pleased to announce that version 0.12 will soon be going live, and with it some hotly anticipated multi-language functionality! In this new version, the game will be able to support English, French, German, Italian, Polish, Portuguese, Russian, Spanish, Turkish, and simplified and traditional Chinese.

And if that weren't enough, v0.12 is a massive update with tons of other changes and improvements— here are the main headlines:

1. New Mode: Ruins Exploration. Explore the ruins scattered across the World Map, find fragments from lost memorials and piece them together to discover Norheim's history;

2. New Immortals: 4 brand new Immortals: El Cid, Flavius Belisarius, Abaoji and Isabella I. And remember, you can claim bonus Gems from the Immortals screen after the update, so don't miss out!

3. New Feature: Elemental Auras for your team, so you can pair up Immortals with the same attributes to wreak even more havoc on the battlefield! Will Attribute Teams become the next big thing?

4. Equipment 2.0: Elemental attributes have been added to Epic equipment, and grant bonuses when equipped to Immortals with the same attributes. Equipping sets of different quality equipment will also activate Set buffs!

5. Buildings & Technology 2.0: You can now lead +100 Troops every time you level up a Castle; Barracks automatically unlock Troop Type ranks (the stronger the Barracks, the stronger the Troop Types); and the capacities of Hospitals and Training Grounds are now merged, so if the number of Wounded soldiers exceeds the Hospital Capacity, they will no longer die. 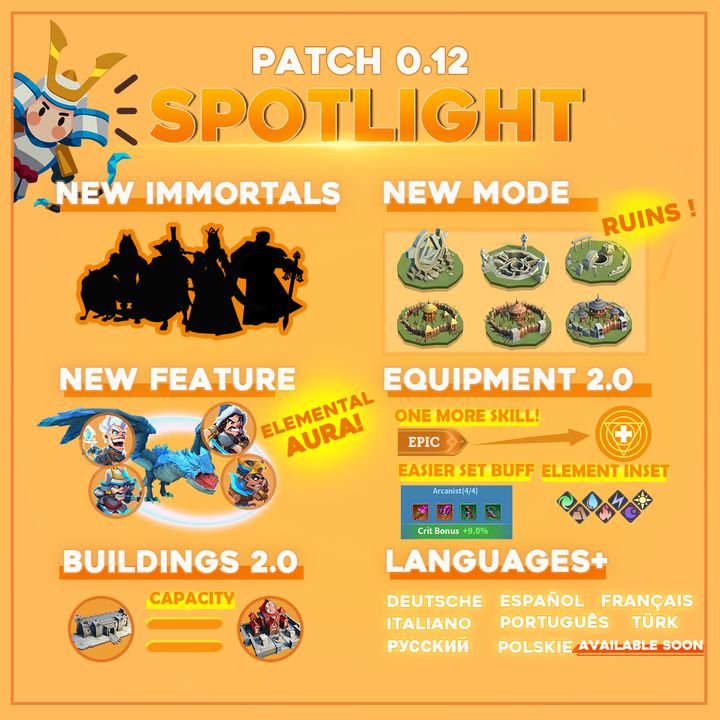 A brand new mode will soon be available for you to play—Ruins Exploration! A number of Ruins will be scattered across the World Map for you to find. Deploy your Scouts to investigate them for a chance to gain items such as Enlightenment, Memorial Fragments, Gems, Contract Builders, Resource Packs and Speedup Items. The Memorial Fragments can be used in your territory's Monuments to reveal pieces of Norheim's history, while collecting enough Enlightenment will unlock the next stage of Ruins Exploration. But remember, exploration takes time and you can only explore each Ruins location once. However, you can share the Ruins coordinates with your friends! Once you've explored the current level Ruins and earned enough Enlightenment, the next level will become available to you. What are you waiting for? Who knows what treasures you'll find and what mysteries you'll unveil?

During the event, players who kill Gnomes will have a chance to obtain Rebel Sigils. These can be used to summon Human Rebels in random locations near the player's own city, who can then be fought by Rallying together with other Alliance members. Defeating these rebels could earn your valuable rewards like Elite Immortal Selection Chests, Gems, Resource Packs and Speedup Items. Remember: the higher the level of the Gnomes you kill, the higher the quality of the Rebel Sigils you'll find and the better Chest Rewards you'll get at the end!

In this new version, we've added 4 brand new Immortals and a new Team Elemental Aura! This means that it's now crucial to try and match Immortals with the same attributes when configuring your battle formations. For example, if you deploy 4 Fire Immortals and 1 Fire Dragon at the same time, your entire team will deal more damage and receive much less. Get ready to see some very interesting Immortal line-ups once the Elemental Auras come online. We'll run a series soon to discuss Immortal pairings in much more detail. 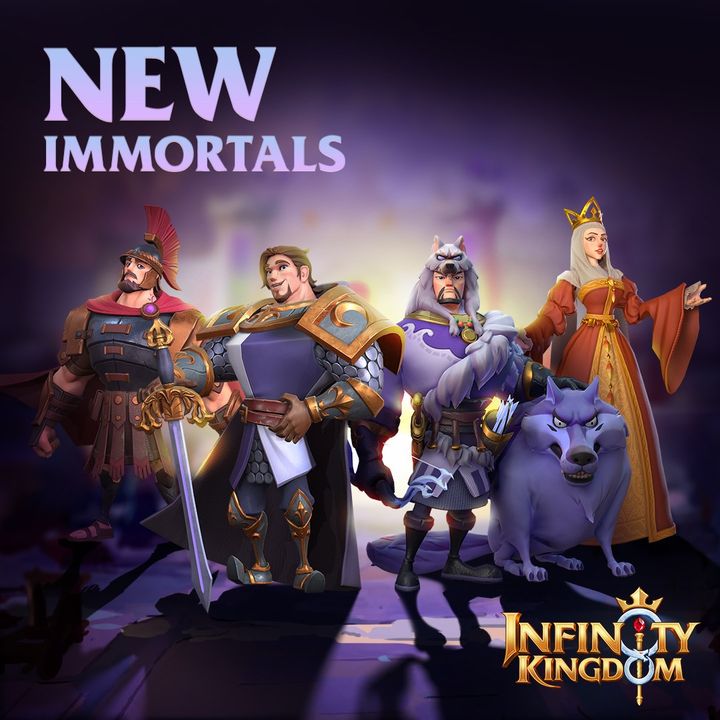 a. When you deploy 3 units with the same elemental attributes, the entire team receives the following buffs: +2% Damage, -2% Received Damage;

c. When you deploy 4 units with the same elemental attributes, the entire team receives the following buffs: +4% Damage, -4% Received Damage;

d. When you deploy 5 units with the same elemental attributes, the entire team receives the following buffs: +5% Damage, -5% Received Damage.

3. Immortal Adjustments: Qin Emperor can no longer be summoned from the Hall of Immortals, and the chance of Helen of Troy's skill causing Chill each time it inflicts damage has been reduced from 30% to 8%.

a. Elemental attributes have been added to Epic equipment, and grant bonuses when equipped to Immortals with the same attributes.

b. Equipping sets of different quality equipment will also activate Set buffs based on the lowest-level equipment used.

c. Resonance attributes are no longer restricted by your equipment, so now Resonance effects will be activated as soon as you upgrade all 4 pieces of equipment to the required level.

5. Other improvements: Legendary Immortals now have 1 extra Skill slot, which is unlocked when they reach 5 stars. Unlock an Epic/Elite/Rare/Uncommon Immortal to get 300/150/100/50 Gems (if you already have these Immortals, the Gem bonus can be claimed from the Immortals screen).

1. We have changed the way you get Dragon Eggs: Fire, Water, Earth, Lightning and Wind Dragon Eggs are now earned from the corresponding Story Mission chapter.

a. Earth Dragon 2 Skill has been changed to: Has a chance of reducing the Damage received by 3 of your units at random for 12s;

b. Earth Dragon 3 Skill has been changed to: Increased Crit Value and Dodge Value during combat, and increased Damage dealt by Earth Immortals each time they lose 10% Troops Power;

c. Wind Dragon 2 Skill has been changed to: 3 random allied units have a 50% chance of recovering HP when they land a Normal Attack;

You asked and we listened! Multi-language support is now here! This is the thing that's been mentioned by the community again and again, so we're excited to finally roll it out! Version 0.12 of the game now supports English, French, German, Italian, Polish, Portuguese, Russian, Spanish, Turkish, and simplified and traditional Chinese. Players can change their language options by tapping on their Avatar and going to Settings > Languages. In-game chat channels also now have an automated translation function, and the English font size has been optimized and improved. 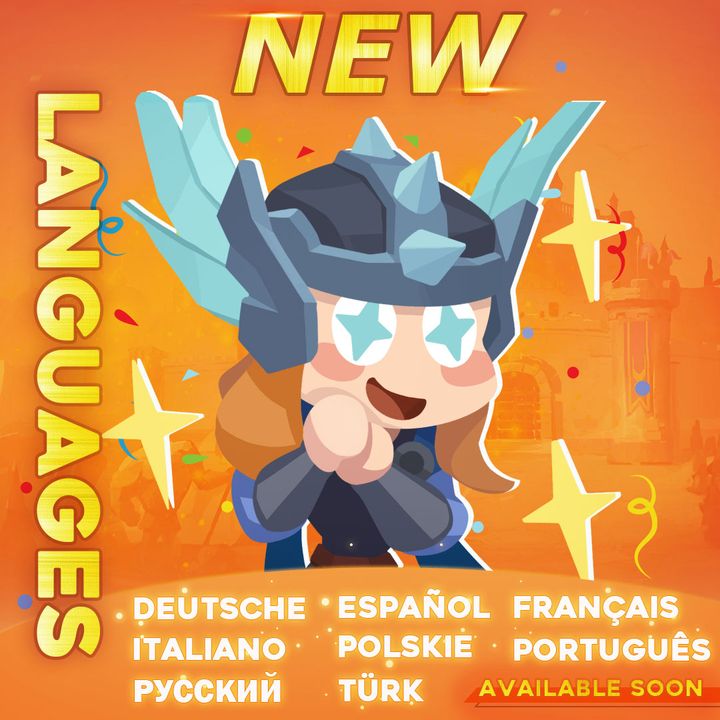 1. Castle: Each time you upgrade your Castle, you can lead +100 Troops and you will be emailed Castle Upgrade Rewards.

a. Each unit can only have 1 Immortal equipped with an Aura skill, and skills with Military, Technology and Economy labels have been removed.

b. New Tower of Knowledge skills:

3. Alchemy Lab: We have increased the time limit on Immortal Rebirth. Once an Immortal has been reborn, he/she cannot be reborn again for a certain amount of time—the rebirth cooldown time will depend on the Immortal's level.

5. Optimized Building Upgrades: We have optimized the pre-building requirements for upgrading your Castle, and made the upgrade process much less fiddly! You can now gather resources from your buildings in a single click, and we have also adjusted the levels at which some buildings become available.

7. Arena: Arena teams are gradually added with the progress of seasons; with 1 team in season 1, 2 in season 2, and 3 in season 3.

8. Hall of Immortals: Every 10 Advanced Summon guarantees an Elite or Epic Immortal

1. Higher Gnome level: The Gnomes on the World Map have been increased to Lvl. 40.

2. Improved Gnome search feature: When you search for Gnomes, you will now find ones at the corresponding level (but remember that Gnomes still refresh based on the Resource Zone settings, so make sure you search for the Gnomes you want to fight in the right Resource Zone).

3. Improved troop marching rules: Once they have set off, Marching Troops cannot be recalled until they have reached their destination. However, when they are on their way back, you can use items to recall them instantly.

4. Improved garrison rules: If the enemy's Walls have been breached, a certain proportion of soldiers in the enemy Training Grounds will be killed.

5. Improved World Map Rally rules: World Map Bosses can no longer be fought by a Rally. They are now all single-player battles.

VIP and other improvements

1. VIP Privilege adjustments: The maximum VIP Daily Login Points has been increased to 150, and there are lots of new bonus attributes and no more 2nd queue or free time.

2. Tutorial improvements: The entire tutorial has been optimized, and Chapter Missions will be used for subsequent tutorials.

1. We have optimized the Lord's Card interface on the World Map; 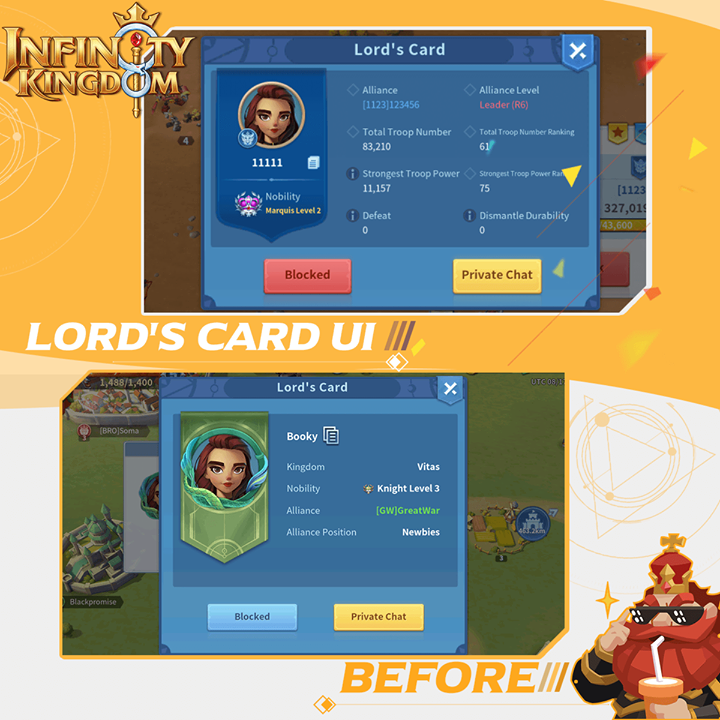 2. We have optimized the Alliance Technology UI screen, and when you enter it will automatically find the recommended location; 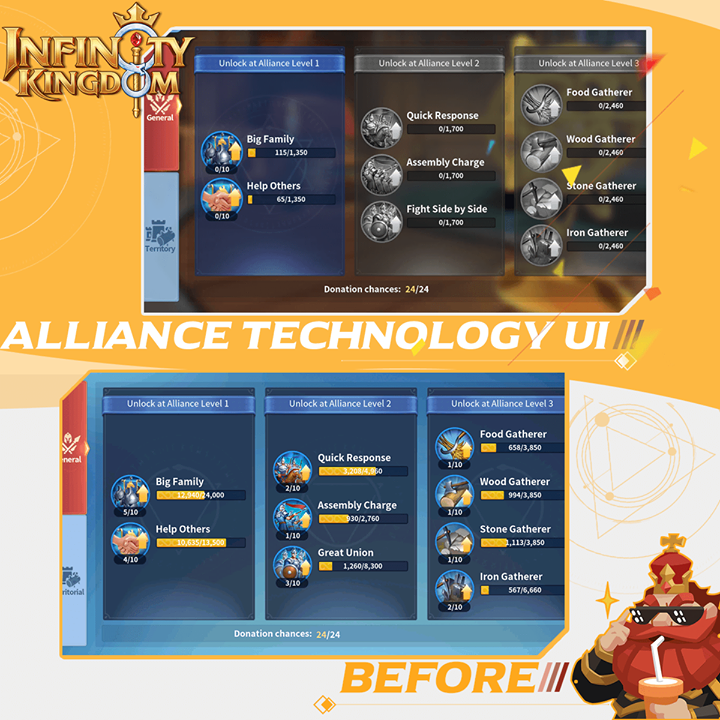 3. Audio improvements: New sound effects when tapping the screen and during Boss fights.

5. Other improvements: We have optimized the Well of Time World Map, Battle screen, and all World Map resource/event screens.

These are all the improvements we're rolling out in version 0.12. Infinity Kingdom has been in the open beta phase for a while now, and we'd like to thank each and every one of you who has stuck with us and provided us with support and encouragement! Thanks to your ideas and suggestions, the game has seen some major improvements and changes over these past few months. With the long-awaited multi-language support on the way, you will soon be able to have even more fun on the World Channel! And of course, we can't wait to hear your feedback on the new Immortals, Elemental Auras and Attribute Teams :) The development team will continue to monitor the in-game environment, balance out the gameplay, and tweak the game modes and operations to bring you an even better gaming experience. The new version will be launching very soon, so keep your eyes peeled!