At last the final War of the Kingdoms event has arrived for all those who play the browser game, Game of Thrones: Winter is Coming! All players will be particularly looking forward to all the battles that can occur during the two day event known as War of The Kingdoms. In this story, the tales and legends that have occurred will be retold between K57 and their illustrious foes for the December 2022 War of the Kingdoms. War of the Kingdoms is an event where all alliances in a particular kingdom put on a united front to compete in warfare or gathering purposes which earn points for their respective kingdom. The day was chilly and a new story is about to unfold for K57 inhabitants.

As the day began on a frosty December 2022 morning, the monthly two day event called War of the Kingdoms began. Life was pretty hectic in the land of Westeros in the weeks preceding from the aftermath of the November 2022 War of the Kingdoms where players were busily gathering resources, producing resources and completing the many daily tasks to improve their battle performance and alliance performance in the browser game, Game of Thrones: Winter is Coming. For K57, when the first day of the War of the Kingdoms began, there was a new development. The Lord of Light’s Blessing (Image 1) was announced as a trial which enables the great cities in the land of Westeros to be reinforced without causing a player to have fervor unless the player scouts the great city beforehand. This is a significant development and a definite improvement in gameplay as many players can now choose to reinforce when they were unlikely to do so before this War of the Kingdoms due to the application of fervor upon said players. Great news and lets see what happens next between K57 and their opponent, K287. 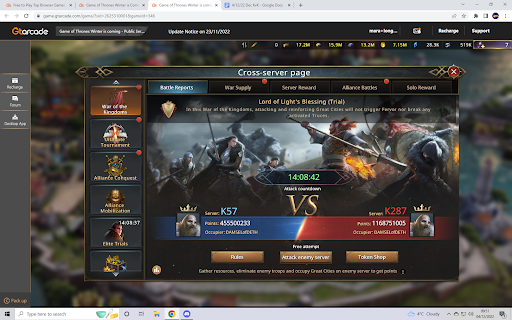 Eight hours out of twenty-four hours have passed since the War of the Kingdoms began for the month of December. ACM has joined the fray and discovered that K287 are more formidable as they have earned over three times the amount of points more than K57. The current play is that K57 has over four hundred fifty million kvk points and K287 has nearly 1.2 billion kvk points. Can K57 close the massive gap over the next sixteen hours of play? 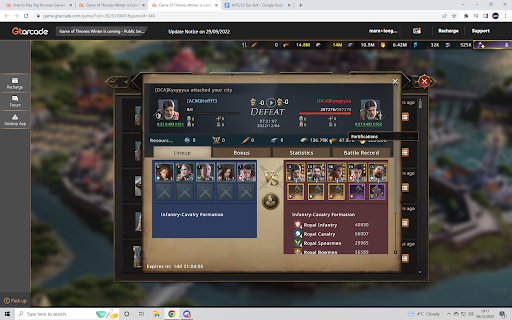 Twenty minutes later, the battle reports are starting to roll in that involve ACM players. Image 2 reveals a player from ACM called HATTIS has been zeroed by an overwhelming player from K287 from an alliance called DEA where the commanders are all equipped with either legendary or epic main weapons plus all the different types of troops at Tier 4 or Royal level. 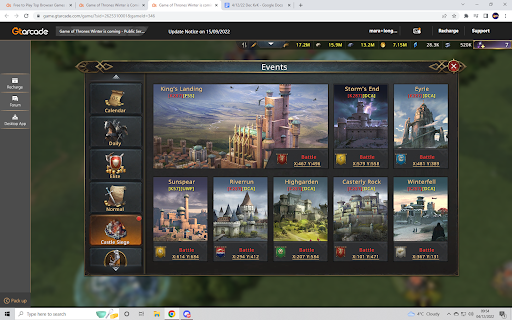 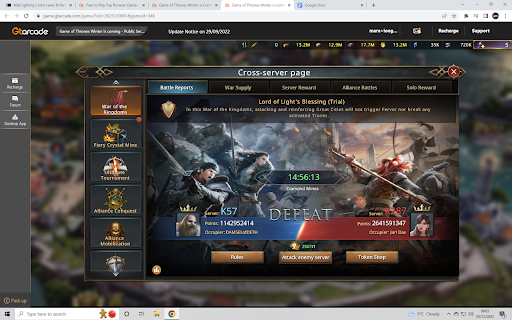