belore ii
This user has no description yet
FOLLOW +

UC Round 5: BDR vs. NBe - Can the Beast be awakened to overcome this?

In the 5th round of this UC Season BDR met with NBe. This was the second match of these two giants and the first one was incredibly close. BDR won that round with 82k to 78k points! Surely both Alliances would go all out during a UC match so it was promising to be a nailbiter. Most people said that BDR would clearly - and easily - win but with that first match during the season was that really a fair assessment? NBe showed a lot of potential so far in this season and i for one was very excited to see how this match turns out.

The attendance looked great for both Alliances with 99 and 98 members each. Then it would have to come down to who has the fastest horses for capturing, attacking and reinforcing the valued locations in this region. The armies stood ready, waiting for the first protective barriers to drop.. and with the seconds ticking over hell was unleashed.

The first split was in theory pretty equal but NBe had the advantage of capturing both outposts, being worth slightly more points. Probably a big boost to morale it also made sure that BDR would come down hard on them the moment that shield was gone. 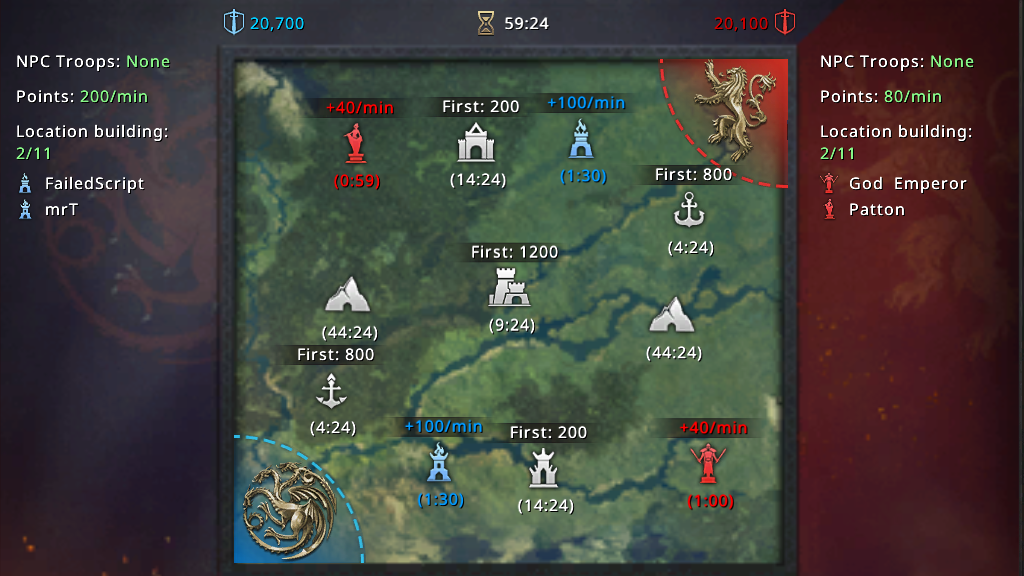 The cheering was deafening when NBe also managed to take Mother away from BDR while they were trying to get a strong defender to that location. BDR really had the pressure on now and as expected the moment the Outposts were attackable NBe could hear the thundering hooves in the distance, coming closer rapidly.

Only to be thwarted by NBe's strong defense and incredible reinforcing. Morale peaking for NBe with that first bloody nose they gave BDR. If they could keep this up they were well on their way to winning this fight! The seconds ticked away and with that the pressure on BDR grew.

Next up the Ports: Can NBe further their lead? So far their horses seemed far superior to those of BDR after all!

Incredible! They did it! Points ticking away for them, putting BDR further and further behind. Oh but what was that? BDR snuck in a steal during the swap of the Targaryen Port! Is this the comeback?

It seems the war-machine of BDR picked up pace after that. They readied their horses again but this time setting their sights on the much higher valued Lannister Port. BARBAROSsA inspired his men and called for aid. With the loss of the Targaryen Port right before this it was imperative to hold his location. He knew this and prayed to the seven.

Unfortunately his prayers went unheard. NBe was not deterred by this though. They inspired their warriors and a quick blow back at the Targaryen Port was planned. Blow following after blow between these two Alliances. Everyone knew what was at stake here. BDR was not resting either though. At the same time they were preparing the defenses at the Port they started their own attack on the Lanister Outpost that was still in the grasp of NBe. What a bold move but would it work out?

What a bloody fight! NBe took the Port and BDR took the Outpost. Clearly a better swap for NBe. If they kept this up it would be great redemption from the previous loss. For now both Alliances awaited the opening of Casterly Rock, a major game changer for many Alliances.

Ohhh what a blow! With ToXiCTaNaLyN in CR and fully reinforced it seemed securely locked away for BDR. NbE would have to look elsewhere for more points. Or.. would they? Bravely they marched on towards Casterly Rock, showing BDR that they know no fear. Slightly confused by this show of defiance TaNaLyN did call for reinforcements though she was sure this must be a ruse, right?

For a brief moment they were worried. This determination and fierce fighting is unsettling. If they keep this fire going NBe will be a problem and might even win? TaNaLyN walked her ramparts deeply in thought, unnerved. Preparations must be made to keep ahead now that they had the upper hand. And what spectacular preparations those were. An unexpected and swift blow to the Targaryen Port later BDR had another structure secured. 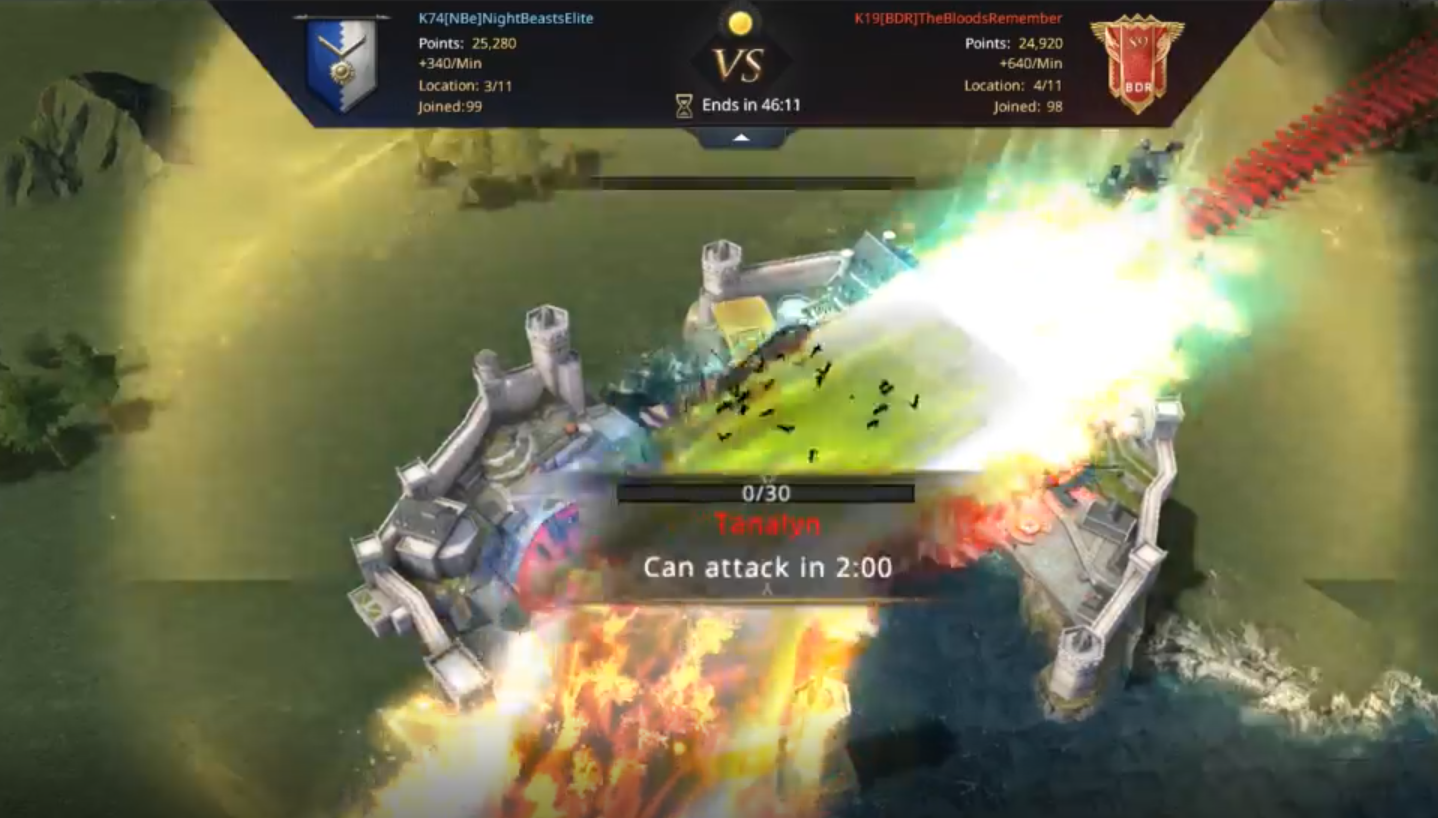 And all this while smashing another offense from NBe on Casterly Rock! Amazing coordination.

Apparently TaNaLyN really was dug in too deep so NBe instead set their gaze on the Lannister Port. Time started ticking against them and they desperately need points to make up. The match picked up pace and each set of rallies came quicker than the last.

All the while BDR tightened their iron grip, setting up their own marches for Mother to drain NBe of the oh so important reduced healing times to keep this bloody fight up.

From the looks of that defense though.. Was it too late? Was NBe bled dry already? The fight seemed dire for NBe at this point.

Alas they did not relent, that Targaryen Port had to fall back into their hands! They might have a black eye but they will not lay down and die! Not today!

Morale rose again after this blast. Down but not out they gathered their strength again and again. A Beast is always most dangerous when cornered after all. But then again.. a wounded Beast might lack the strength to land hurtful blows? No less than 3 sets of rallies later NBe was not able to take the Targaryen Outpost from Grimalicious or Casterly Rock from TaNaLyN.. and on top of it also lost the Targaryen Port. Did this finally break them?

The Beast appeared to be in it's death throes but a last shimmer of hope remained: The Mines are about to open and if NBe was able to capture and hold both it would be a very close call. And so all 394 eyes on the map turned to the timer ticking down...

While at first it looked like a complete disaster it turned into a win with that quick burst of speed Gabzs had! Now the question remaining was: Could NBe hold? And could NBe take the other mine? With so many strong BDR people already bound in other buildings it did seem possible. BDR did not let them sit there waiting for long: Their armies rushed in to deal the final blow!

A valiant defense despite being bruised and beaten all over from this rough match. NBe stood there under Gabzs' leadership, spitting in BDR's faces and proclaiming they could keep doing this all day. A theory that BDR immediately tested. Another fatal set of marches was coming..

.. and sadly for NBe fatal seemed way too literal for this one. BDR grabbed the last building on the map and broke NBe's back with that.

It was such an intense uphill battle for NBe and they can be proud on how they fought BDR despite it all. We can be sure that this was not the last time we saw NBe in Ultimate Conquest if they keep this up.

For BDR on the other hand it was far from over... Their next match would turn out to be FDH, another old name in this game that would surely not be easy to beat either. Even if they beat FDH - N3O and DEP are the other two contestants still in this tournament. The next few matches will surely be pure nonstop action! So stay tuned...

belore ii
This user has no description yet
FOLLOW +