Did you hear that there's a new king in town? What sort of king you might ask as this is Westeros and every kingdom has a king (or queen). I am talking about a different sort of king, the King of merit, the one and only Klfrotron. The intrepid hunter who spends his days travelling from kingdom to kingdom and hunting unwary residents who had forgotten to put on their shiny bubbles. After recently achieving the goal of dethroning TheBlue, and taking over as the player with the most merits in the game, some would have thought Klfrotron might finally slow down and enjoy his success. But that is not the kind of life that appeals to Klfrotron. Hunting is his joy and now that he beat TheBlue, he had to make sure he pulled ahead and stayed ahead. 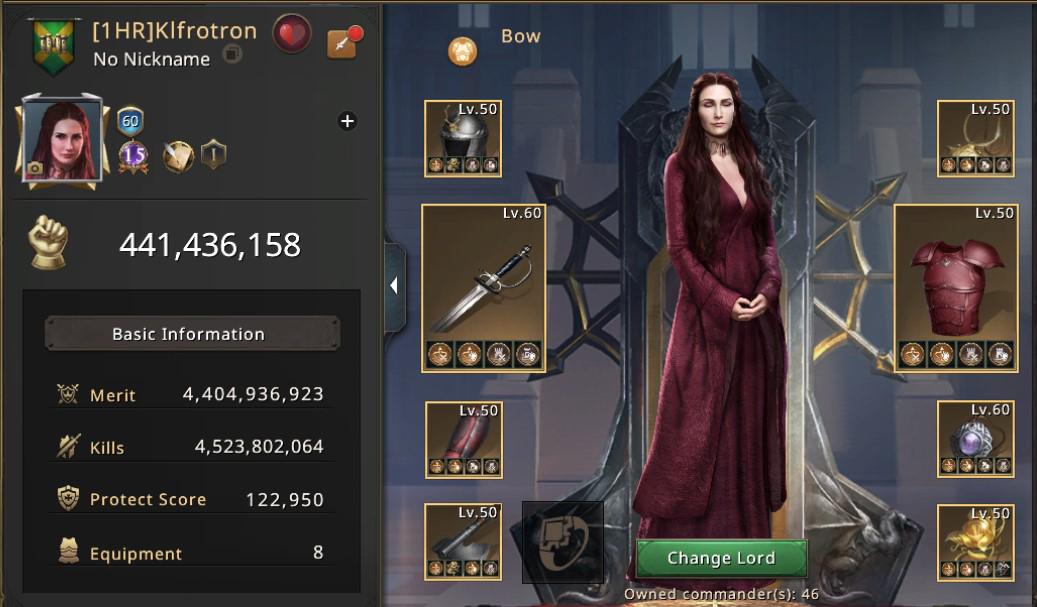 Sitting at just above 440 million, the low power allows him to jump kingdoms at a nominal scroll cost. But the 4.4 billion merits that he had amassed in just over a year is what truly sets him apart. And it was time to add another 100 million merits to the tally, he had all his plans laid out as he set out on a multi-kingdom journey that would get him to his goal of 4.5 billion merits. 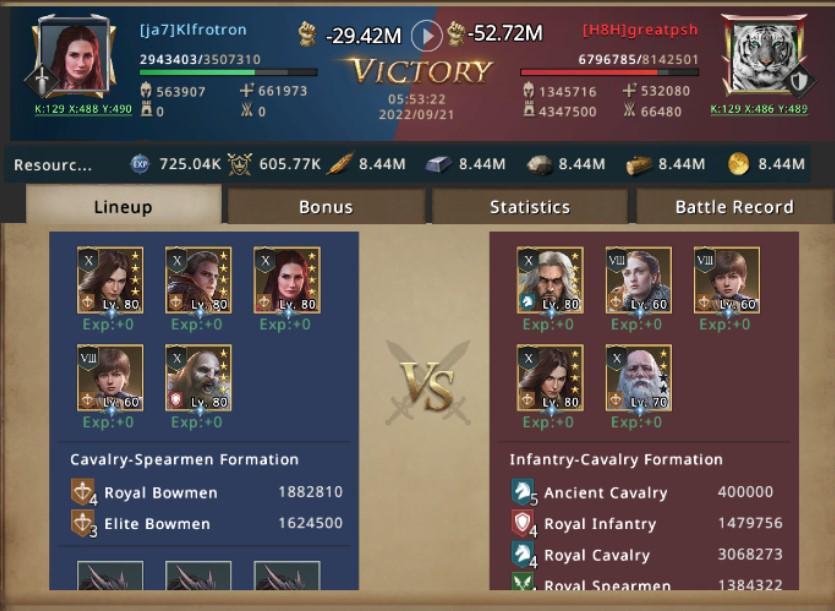 .First stop, k129, our fearless hunter had his eyes set on greatpsh from H8H alliance, he wastes no time in setting rallies on greatpsh supported by some of his friends. The first hit went pretty well for our gutsy invader (how many people would dare hit a player with tier 5 troops?)

He followed the first attack with four more rallies earning a neat 3.7 million merit, after the fifth rally, greatpsh came online and bubbled his castle. Too little, too late but he saved the last 1.6 million troops in his castle and his lord from getting capped by the invader's next rally.

greatpsh's bubbling deprived Klfrotron of a good chunk of merit and he wasn't a happy man. But there was not much to be done in k129 once his query had given him the slip by hiding under the bubble. So, he sets sail for his next destination, K152.

As soon as he gets there, he sets about the business of soloing unbubbled castles. His first victim is Batifino who sits there with 2.5 million troops, not a challenge for our seasoned invader at all, the first hit gives him a neat 1.5 million merits and the second hit yields another 1.88 million and also successfully captures Batifino's lord.

Next to fall to our invader is Lord M4ximus who loses 1 million troops and gives over 1.8 million merits. But while he had been enjoying his yolo solo fun, unbenowest to Klfrotron, DARK CROW from WEE had become aware of his presence. DARK CROW sends a solo march at Klfrotron, extremely confident in his ability to hurt the invader significantly. 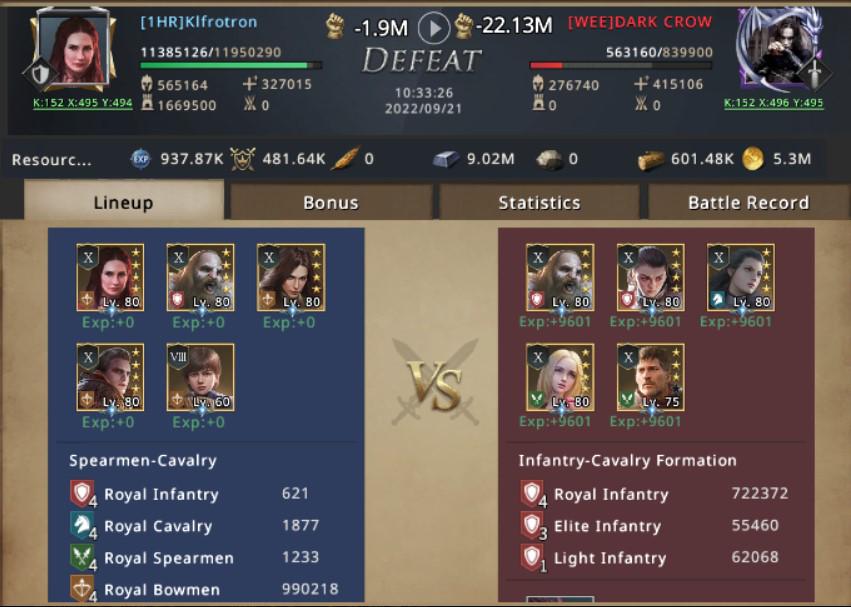 In fact, he was so confident in his own strength that he didn't even bother using an army size buff or a proper commander formation for that matter. The solo proved costly as DARK CROW ended up with 270k dead troops and 415k wounded. His alliance mate Burnt Toast followed in CROW's footsteps and soloed as well, losing 24 million battle power and getting 325k of his troops killed. 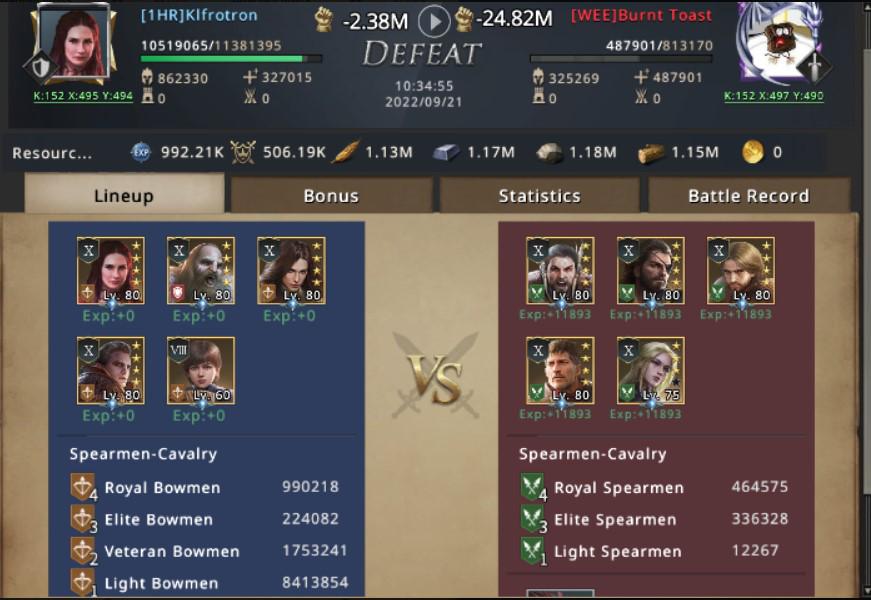 The solo hits Klfrotron took didn't cost him much in terms of power, but he did end up losing over a million in t1 troops. But those aren't so hard to recover, he counted himself lucky that his t4 and t3 troops were left untouched thanks to the valiant sacrifice of his t1 frontline

Next stop kl117, the invader sets his eyes on Beardman2 and starts to divest him of his troops through rally after rally, finishing off with a cheeky solo and earning over 4 million merits just from this one player. 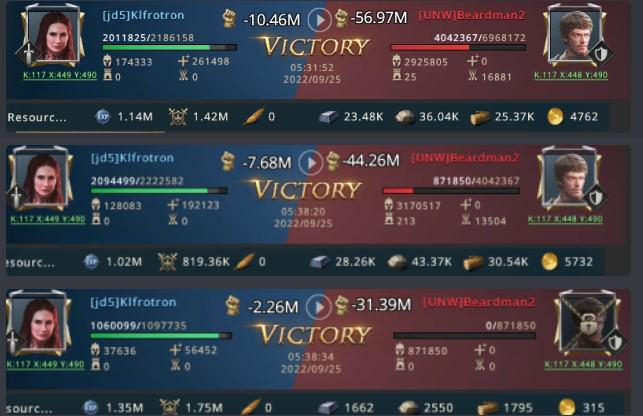 .Logan12 from UNW watched the invader rally Beardman2 and took a brave decision, he soloed Klfrotron while his lord was out in a rally. But the 7.7 million troops on the wall proved to be too much and Logan12 lost a huge chunk of his march. It is quite possible that if Klfrotron had his lord home, Logan would have lost his lord. 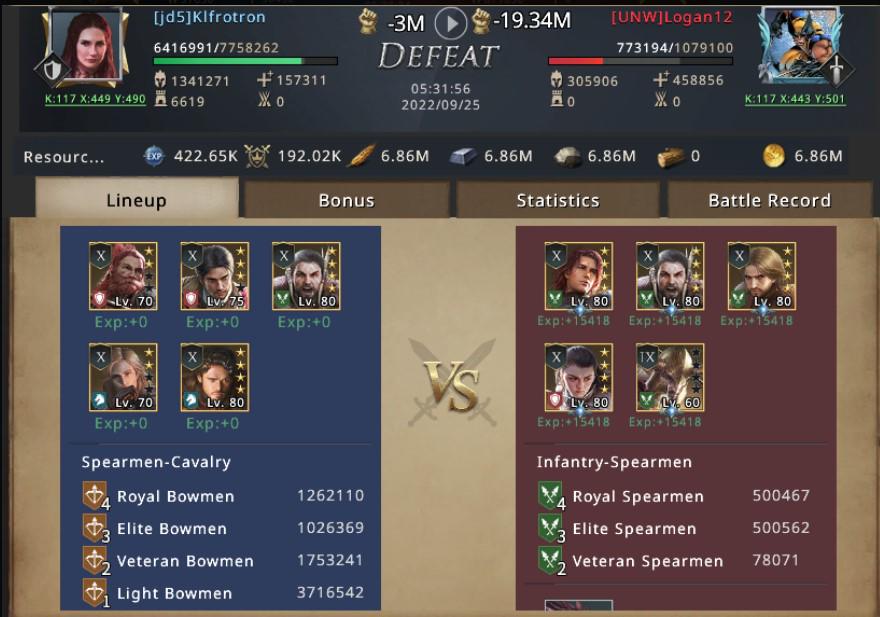 There were quite a few things wrong with the shirt, the first being a lack of any sort of synergy in the commanders, secondly, Logan sent a 1.09 million march with only 500k tier 4 troops, which certainly reduced his capacity to deal damage or the cost in troops for Klfrotron might have been much higher. 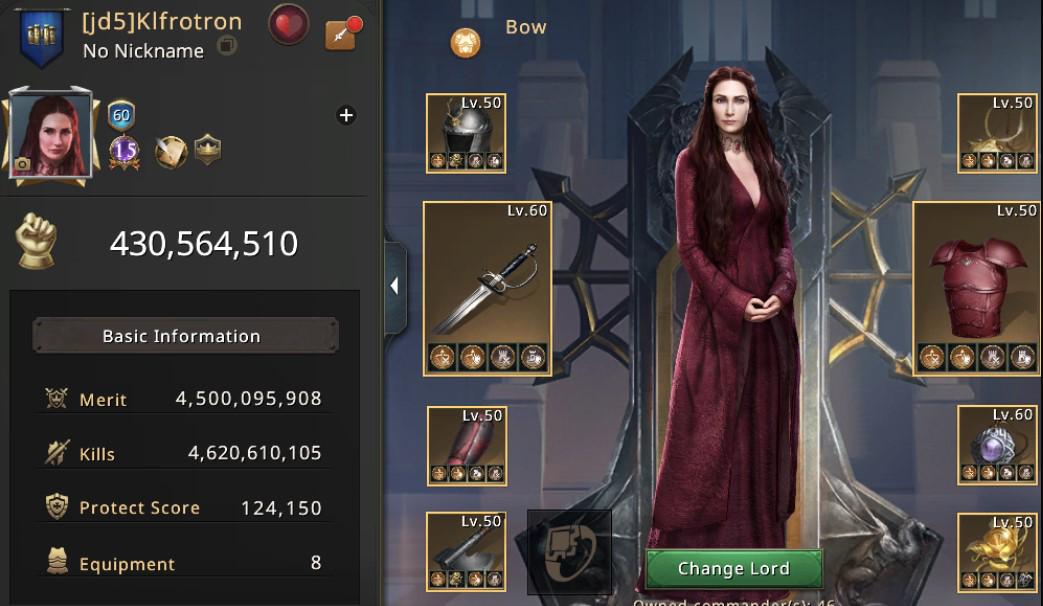 At this point, he had gained the 100 million merits he had set out to gain for the loss of barely 11 million battle ratings all told. A very successful day of merit hunting indeed. We will catch up with Klfrotron again soon as he continues on his travels through the many kingdoms of Westeros and moves ever closer to the 5 billion merit mark.