The tale behind commander Latz karin!

Sons of the Harpy! 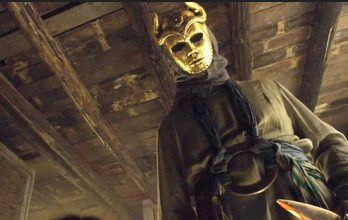 This article is about a Westeros insurgency group. Find out why Latz Karin is joining Sons of Harpy and who are they!

The Sons of the Harpy were an underground insurgency group opposing the rule of Daenerys Targaryen over Meereen, composed of members of the slaver class. They took their name from the harpy, the traditional heraldic symbol of the slave-masters in the Ghiscari cities of Slaver's Bay, and the Ghiscari Empire before them. They concealed their identities by wearing golden masks with horned faces resembling harpies. 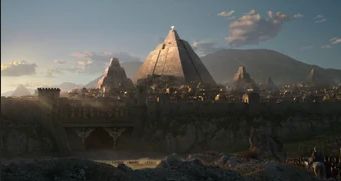 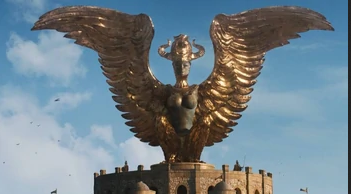 The Sons of the Harpy were formed after Daenerys Targaryen conquered Meereen as part of her campaign to break the slave trade in Slaver's Bay. 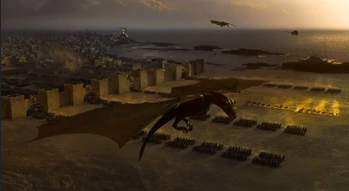 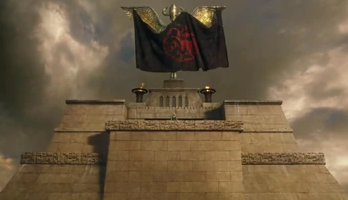 In the A Song of Ice and Fire novels, the Sons of the Harpy are also a resistance movement of Ghiscari citizens with ties to the Great Masters and the aristocratic slaver families of Meereen. They target freedmen, Unsullied, and "shavepates" - Meereenese that have accepted the rule of Daenerys Targaryen and have shaved off their ostentatious Ghiscari hairdos as a sign they have abandoned the customs of the 'old' Meereen. They are not described wearing masks; in fact, they are never even seen in the books by the POV characters.

Their membership seems to be drawn from those who benefited from the old regime, particularly the old aristocratic families of the Great Masters, but Daenerys cannot confirm which former slave-master families are supporting the Sons of the Harpy and which ones are not. She strongly suspects the House of Pahl, among others, but the main problem is not even knowing who they are: as an insurgency, they are conducting a "shadow war" in the alleys of Meereen, ambushing Daenerys's soldiers and loyalists, as well as freedmen, when they are alone or in small groups, then fleeing back into the night to avoid retaliation. Whenever they kill, they leave their mark near the murder scene - not a mask but a harpy drawn in the blood of their victims. Daenerys's loyalists have not managed to capture or kill even one of them.

At first, the Sons of the Harpy limited their attacks to unarmed freedmen, cutting them down in the streets or breaking into their homes under the cover of darkness to murder them in their beds. Later they have grown bold and moved to kill Daenerys's soldiers, starting with Stalwart Shield. 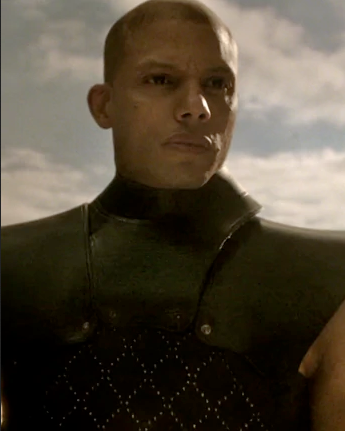 The Brazen Beasts have taken dozens of the Harpy’s Sons, and those who have survived their capture have yielded names when questioned sharply, but the identity of their leader remains unknown. Among the victims of the Sons of the Harpy are:

The Unsullied Stalwart Shield - stabbed multiple times by at least six attackers, then his throat was filled with goat genitals.

The Unsullied Black Fist and Cetherys - slain by crossbow bolts.

The Unsullied Mossador and Duran - crushed by falling stones.

The Unsullied Eladon Goldenhair and Loyal Spear - poisoned at a wineshop.

Three former slaves: moneylender, a cobbler, and a harpist named Rylona Rhee whose fingers were cut off before they killed her.

Three freedwomen weavers who made a beautiful tapestry for Daenerys. The Sons of the Harpy broke their loom and raped them before slitting their throats. It is implied they were the former slaves of Grazdan zo Galare, who had petitioned Daenerys for compensation from some of his former slaves who had opened their own weaving shop, using skills learned during their time as his slaves under the tutelage of a late slave.

Unlike in the show, the Sons of the Harpy never act in broad daylight. So far in the books, Grey Worm and Barristan Selmy have never had an encounter with them.

Although it has not been proven conclusively, there are strong circumstantial evidence that indicate Hizdahr is in league with the Sons of the Harpy, maybe even their leader:

Following Daenerys's departure, Ser Barristan Selmy is convinced of Hizdahr's guilt and has him thrown to jail. Soon afterwards, the Sons of the Harpy renew their attacks, claiming many more victims than before (twenty-nine in one night) - which strengthens the suspicion against Hizdahr. They have not only left their mark near the bodies, but also messages like "Dragons must die", "Harghaz the Hero","Death to Daenerys"

At the point the novels reached, the Sons of the Harpy have not been stopped yet, not even slowed down. Ser Barristan and others who remain loyal to Daenerys form a council to rule Meereen till she returns, but they do not have time to take care of the Sons of the Harpy due to much more urgent matters: Yunkai is leading a new alliance of slaver-powers to besiege the city.

During the Siege of Meereen led by Daenerys Targaryen, Oznak zo Pahl is the champion of the Great Masters. He is slain in single combat by Belwas.Oznak's father, commander of the Meereenese city watch, dies defending the city gates after Joso's Cock smashes them. Oznak's three uncles are among the one hundred and sixty-three slavers Daenerys orders to be disemboweled and nailed to posts in Meereen's plaza in revenge for the one hundred and sixty-three slave children that had suffered the same fate under the Great Masters' orders.

With all of the Pahl men now slain, the House of Pahl is now ruled by the women of the family;they are bitter old women with a taste for blood. there surviving members of the House of being part of the Sons of the Harpy. And Latz Karin belongs to this house 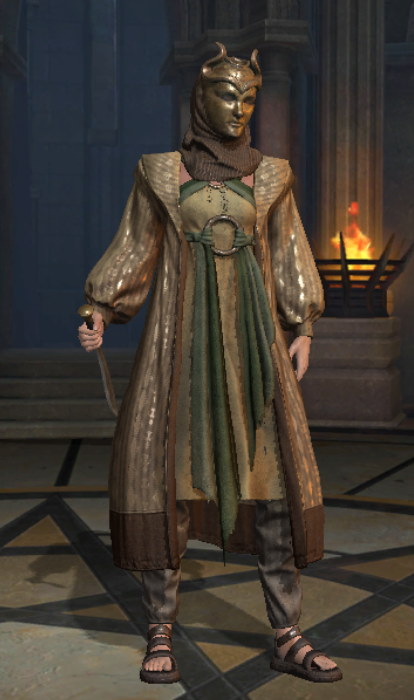 The article was about her house and her group! Let's read her own story from her page now that you know more about her background and her house 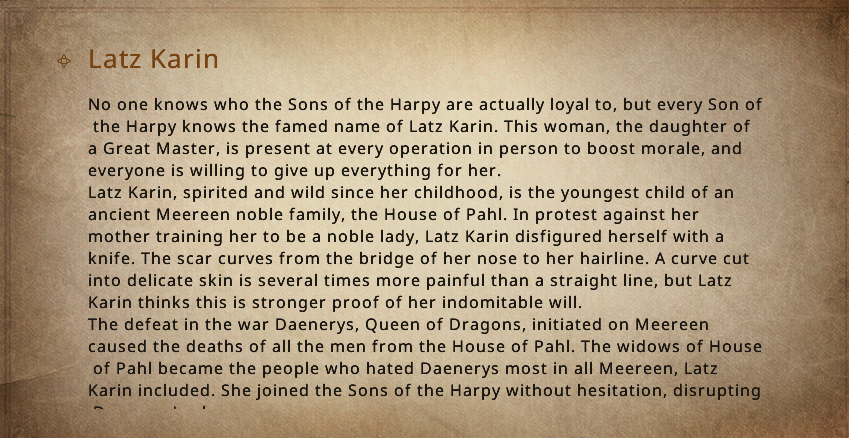 Check out this video from chronicler Hadzy if you want a closer look at the commander skills and stats:Game of Thrones : Winter Is Coming - HIGHSPEED REVIEW - LATZ KARIN - BEST PUREINF COMMANDER?!